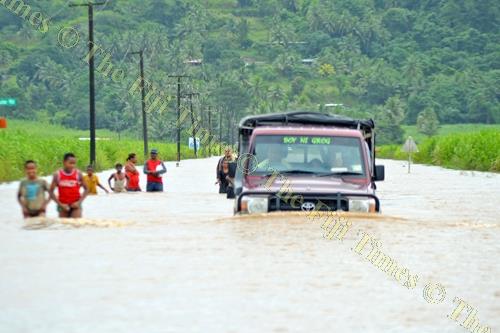 ROADS in various parts of Labasa will remain closed until further notice.

The Fiji Roads Authority has advised members of the public to find alternative routes where possible and to be cautious.

The roads that are closed because of flooding are Qawa Crossing at Boubale and Urata in Bulileka. Both roads are inaccessible.

The Soasoa Flat on Wainikoro Rd in Labasa and Namoli Rd from the bridge to Jim’s Service Station is closed to traffic as the water was half metre in depth.

For Labasa Town, only the Nabouwalu side is accessible to town while the Bulileka and Wainikoro sides are inaccessible.

Members of the public are further advised to take extra care when travelling through Korotari Rd, Wasavulu settlement as it is now open to traffic.

The authority has also urged the public to stay away from flooded roadways.

Motorists have also been advised not to drive into water of unknown depth and current as this can be life threatening.