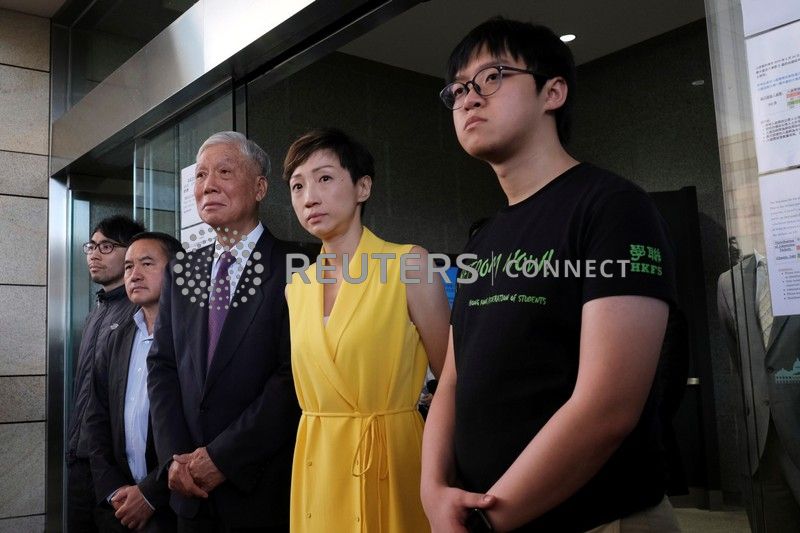 HONG KONG (Reuters) – A Hong Kong court jailed four leaders of 2014 pro-democracy protests on Wednesday amid heightened concerns over the decline of freedoms in the China-ruled city nearly five years after activists took to the streets in mass protests.

The sentencing of the nine activists followed a near month-long trial that was closely watched as China’s Communist Party leaders have put Hong Kong’s autonomy under increasing strain, stoking concern among foreign governments, rights groups and business people.

Law professor Benny Tai, 54, and retired sociologist Chan Kin-man, 60, were both jailed for 16 months for conspiracy to commit public nuisance tied to the protests that paralysed parts of the Asian financial centre for 79 days in late 2014 and became known as the Umbrella Movement.

Their sentence had been reduced by two months given their clean criminal record and positive character, Justice Johnny Chan said.

“We maintain our determination to achieve universal suffrage … this won’t change,” Wong shouted out in court as he was taken away.

Since the city returned to Chinese rule in 1997, critics say Beijing has reneged on a commitment to maintain Hong Kong’s high degree of autonomy and freedoms under a “one country, two systems” arrangement.

The protesters had demanded that China’s Communist Party leaders allow genuine universal suffrage in Hong Kong to select its leader. Police cleared the demonstrators in December 2014, and authorities granted no democratic concessions. For an explainer, click: [https://reut.rs/2IzSFWA]

Chan, in passing sentence, acknowledged the right to civil disobedience and the right of assembly and free speech, but said the protracted road blockages had caused suffering to the public and that some restrictions on freedoms were necessary in a democratic society.

Another former student leader, Tommy Cheung, was ordered to carry out 200 hours of community service.

Tanya Chan, a democratic lawmaker, 47, had her sentencing postponed until June 10, following the discovery of a life-threatening brain tumour that required an operation, she said.

Several hundred supporters, many wearing yellow ribbons and holding yellow umbrellas, a symbol of the protests, gathered outside the West Kowloon Law Courts, and later at an evening vigil, demanding the four men be freed.

“I’m sad I can’t be in jail with them. It’s their bright moment to enshrine their love of democracy,” said Chu, as the crowds around him cheered and cupped candles in their hands.

The trial was considered the most significant legal manoeuvre by authorities to punish those involved in the 2014 protests, called Occupy Central, in reference to the city’s central business district.

The demonstrations were Hong Kong’s biggest and most protracted in recent decades and one of the boldest challenges to China’s leaders since pro-democracy protests in and around Beijing’s Tiananmen Square in 1989.

Organisers estimated that more than one million people took part in the protests over nearly three months.

All the leaders had argued the protests were intended as peaceful, non-violent civil disobedience, only to benefit society and make positive democratic progress.

Justice Chan said their “martyrdom … was a concocted one”, noting that the price the defendants were prepared to pay had also to be borne by an inconvenienced public.

After the sentences, the five freed defendants urged the public to turn out en masse on Sunday for a protest to show solidarity with those jailed and to oppose proposed extradition laws that would allow people to be sent from Hong Kong to mainland China for trial.

Critics fear the laws, which are expected to be passed this year, could further erode legal protections so vital to the capitalist hub, and undermine the city’s international reputation.

A representative for the British consulate in Hong Kong said it would be “deeply concerning if the outcome for these individuals (the Occupy leaders) were to deter the people of Hong Kong from participating in peaceful protest in the future.”

The U.S. consulate said in a statement it was concerned by the Hong Kong government’s decision to bring the charges against organisers of the “peaceful protests in 2014”.

“Such prosecutions can stifle the exercise of the basic freedoms enshrined in the Basic Law,” said a U.S. consular spokesman, referring to the city’s mini constitution.

Taiwan’s Mainland Affairs Council said in a statement that it “deeply regretted” the court’s decision, which it said showed the failure of “one country, two systems” to protect political rights.