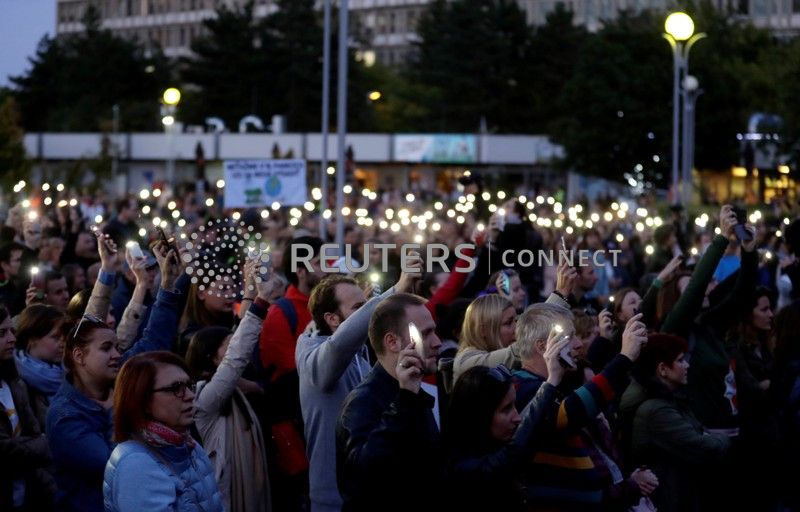 BRATISLAVA (Reuters) – Slovak authorities charged a high profile businessman and three others on Monday with murder over the killing of a journalist and his fiancee last year, a case that still roils politics more than a year after it brought down prime minister Robert Fico.

Politically connected entrepreneur Marian Kocner and two alleged accomplices have pleaded not guilty in the murder of journalist Jan Kuciak and his fiancee Martina Kusnirova. The fourth suspect has confessed to the shooting.

A fifth man has confessed to facilitating the killing and has made a plea deal with prosecutors to act as a witness in the trial of the other four.

A spokeswoman for the state prosecutor’s office said in a statement that the four suspects could face life in prison on six charges including pre-meditated murder. The announcement completes the investigative phase of the case, which has been watched as a test of Slovak police and judicial independence.

The murder of Kuciak prompted mass demonstrations against corruption last year and forced the resignation of Fico, who had dominated Slovakia as prime minister for 10 of the previous 12 years.

Revelations of links between Kocner and security officials that were exposed during the investigation have led to more resignations in recent weeks.

Kuciak, 27, and Kusnirova were gunned down in their house outside the capital Bratislava in Feb. 2018. Prosecutors say Kocner, a subject of Kuciak’s reporting on corruption, had contracted out the killing. Kocner has denied any wrongdoing.

Although Fico resigned over the case last year, his ruling three-party coalition has survived, led by his hand-picked successor Peter Pellegrini.

But the case could still have a major political impact in a general election in February, with polls showing a slide in support for the ruling SMER party, and politicians from other parties also playing down their ties to Kocner.

Prosecutors said in August they had extracted tens of thousands messages from Kocner’s phone including communication with “representatives of state bodies and the justice system”.

Slovak media published parts of Kocner’s messages, leading to resignations of a deputy minister, two prosecutors and a judge.