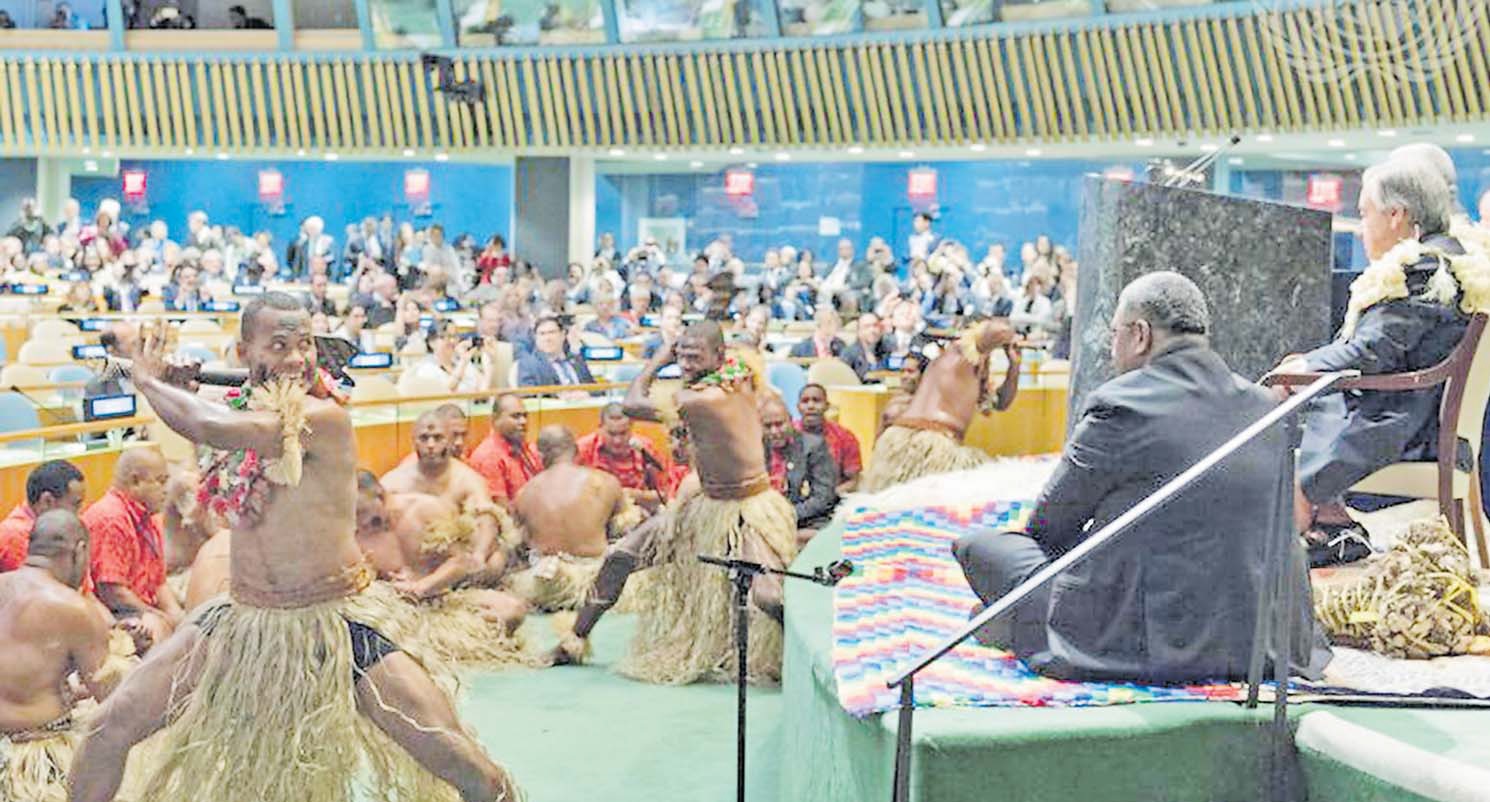 performance by Fiji at the opening of the UN Ocean Conference in 2017. Picture: SUPPLIED/UN Photo

The PICs constitute a significant voting bloc in the United Nations (UN) and international negotiations.

Despite not usually being considered to be particularly powerful actors, they have become much more active, coordinated and self-confident in international politics over the last decade.

Most recently, for example, the PICs played an important role in moving into force the UN Nuclear Ban Treaty.

With limited diplomatic capacities being one of the major obstacles for most of the PICs, and many small states in general, the regional diplomatic havoc is likely to further reduce much-needed capacities in international politics on issues like climate change.

The soaring distrust between the states of the region will make pooling of resources for joint international activities even more challenging.

It also undermines the narrative the PICs have derived self-confidence from: that they are not small islands states, but large ocean states, because of their large maritime zones, but also because the ocean is nothing to divide but to unite.

Important summits, including the 26th UN Climate Change Conference (COP26) or the 2nd UN Ocean Conference, lie ahead, meaning that the regional hassle comes at a very inopportune time.

As most parts of the world will be occupied with the economic effects from the COVID-19 pandemic, it will be even more difficult for the PICs to raise awareness of their own needs if they do not act as a unified bloc.

More decisive for future Pacific inter-islands co-operation in international forums than the split of the Forum is the distrust among the PICs that has been revealed and reinforced by the struggle over the PIF leadership.

The PICs are not only facing a split between Micronesia and the rest of the region that will ease the relevance of the Forum as an observer in the UN General Assembly.

Rather, as the controversy about the University of the South Pacific (USP) shows, there are multidimensional fractures that are likely to impact collaboration outside the Forum structures as well, including in the informal Pacific Small Island Developing States (PSIDS) grouping at the UN that excludes Australia and New Zealand.

Still the loss of importance of the Forum in itself is a reversal for the PICs.

In 2019, the UN General Assembly adopted a resolution requesting the UN and the Forum to further strengthen their cooperation and the UN secretary-general, for the second time in history, visited the Pacific islands region for a High Level Political Dialogue with the Forum leaders.

Even though working with Australia on the issue of climate change was never an easy task for the PICs, the Forum proved to be a vehicle to obtain compromises that would be more difficult to reach globally.

The success of the PICs in convincing Australia to ultimately agree to the Forum’s 2019 Kainaki II Declaration, including the agreement that global temperature rises should be limited to 1.5°C – something Australia had opposed during the 2015 Paris

Agreement negotiations – was a strong signal also on the international level.

Much of the increased global presence and improved co-ordination of the PICs in international politics is closely linked to another, earlier Forum crisis, Fiji’s 2009 suspension.

The move, driven by Australia and New Zealand, was never fully backed by most of the PICs. One of the unintended consequences of Fiji’s suspension was that it pushed Fiji not only to create new venues for regional co-operation, but to invest more capacities on multilateral cooperation.

Aligning itself closely with China, Fiji was quite successful in promoting international PICs co-operation via the PSIDS grouping and in portraying itself as a PICs leader in international politics.

In fact, Fiji has an impressive record of international commitments, including its leadership of the G77 in 2013, co-chairmanship of the 1st UN Ocean Conference and presidency over COP23 in 2017, when the Fijian ambassador to the UN and now UN Special Envoy on Oceans Peter Thompson also chaired the UN General Assembly.

However, trust in Fiji as a regional and global leader has taken a hit because of the USP controversy and because Fiji supposedly voted, alongside its regional opponents Australia and New Zealand, for Henry Puna as the new Secretary-General of the Forum.

Palau has even announced the withdrawal of its embassy from Fiji. Being a critic of Fiji’s influence for some time, Samoa has started another attempt to move regional institutions from Fiji to Samoa.

Fiji sees itself confronted with the criticism that its actions undermine the “Pacific Way”, an argument Fiji has used for many years against Australia and New Zealand.

As incoming chair of the Forum, Fiji will now have to find solutions for the regional disputes instead of celebrating a cheerful PIF comeback after it returned to prime ministerial representation in 2019.

Internationally, Fiji’s further ambitions may be thwarted without the full backing of the PICs, including its aspiration to be the first-ever elected PIC to the UN Security Council, something that appears to be more overdue than ever after the recent election of two Caribbean island states.

While the regional divide will lead to the increased relevance of bilateral relations to the PICs, and may contribute to even more rivalry between the US and China over influence in the region, it is not good news for many other actors like the EU.

While the EU and some of its member states have relations with the PIF, with the exception of France there are hardly any well-developed bilateral relations with island states.

As Fiji’s suspension from the Forum has shown, when there is a crisis of Pacific regionalism, there can also be unexpected dynamics.

Again, there is the chance that the current crisis will lead to a reshuffle of regional co-operation with even positive impacts for collective global action of the PICs.

However, this requires that the distrust between the PICs, and maybe even more importantly their leaders, can be overcome by means of reconciliation.

It is vital for the PICs to speak with one voice in international politics on issues as important to them as climate change.

Even more than that, the world needs the PICs to speak with one voice to call for strong climate action and hold the states responsible accountable.