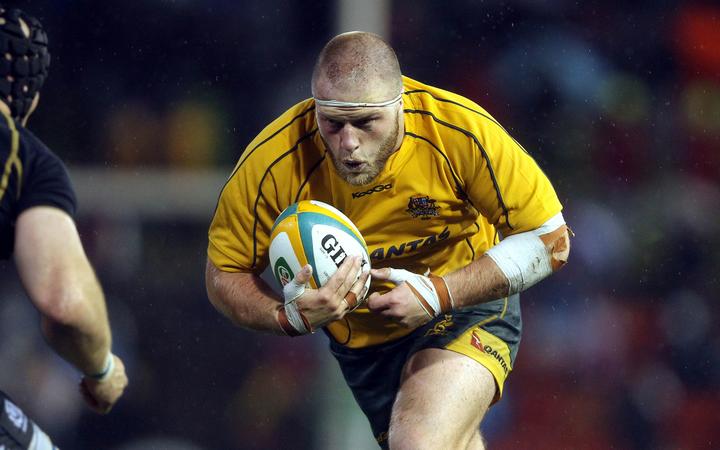 Dan Palmer in action in his one and only test for the Wallabies in 2012 Photo: Photosport Ltd 2012

One-test prop Dan Palmer has become the first Wallabies player to come out as gay, writing in a newspaper column on Friday of mental health issues and drug problems while coming to terms with his sexuality.

The 32-year-old wrote in the Sydney Morning Herald of the anguish of “living the dream” as an elite athlete while being trapped in a “false narrative”.

“I was incredibly frustrated, angry and desperately sad. I despised myself and the life I was living,” wrote Palmer, a former vice-captain of Super Rugby side ACT Brumbies.

“Most nights, I cried myself to sleep and routinely numbed myself with a heavy cocktail of opioids.

“I fantasised about disappearing, changing my name and starting my life all over again. It is not an exaggeration to say my own death felt preferable to anybody discovering I was gay.”

Former Wales captain Gareth Thomas is the only other rugby union international to come out. After going public in 2009, Thomas also revealed struggles with personal demons while concealing his sexuality.

Palmer, who played tighthead prop for Australia against Scotland in 2012, said he had overdosed on painkillers while in France and woken up in a “pool of the previous day’s food”.

The moment was transformative, and he flew to London to share his secret for the first time with a friend.

While he said he had never felt discriminated against in the rugby environment, Palmer was motivated to come out after former Wallabies fullback Israel Folau posted on social media that hell awaits “homosexuals” who do not repent.

Folau, a fundamentalist Christian, had his Wallabies contract torn up by Rugby Australia last year.

“Although it wasn’t the primary impetus for me doing this, the longer the Folau saga dragged on, the more I felt a responsibility to say something,” he said.

“To me, what is more important than the damage he has caused rugby is the deep impact he has undoubtedly had on kids who looked up to him, and who struggle every day with understanding their sexuality.

“He will never see the impact he has had on these young people, but if he could, I doubt he could live with himself.

“Thankfully, from my experience in rugby, views like Israel’s are the exception, not the rule.”

Only a handful of elite rugby union players have come out.

Sam Stanley, who played rugby sevens for England, became the first English professional rugby union player to come out in 2015.

Welsh international rugby union referee Nigel Owens, one of the game’s most popular and recognisable officials, came out in 2007 and long championed inclusion for gay sportsmen and women.