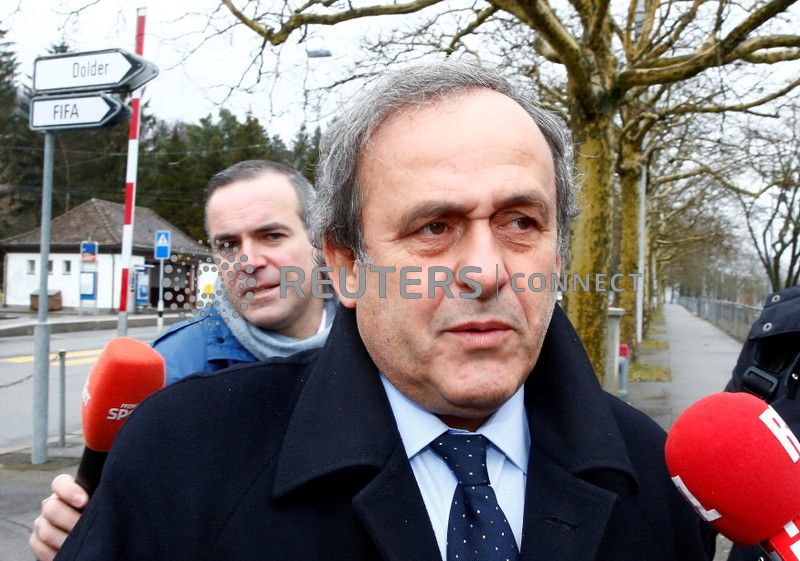 PARIS (Reuters) – Michel Platini, the former head of European football association UEFA, was detained for questioning by French police on Tuesday over the awarding of the 2022 World Cup football tournament to Qatar, a judicial source told Reuters.

Platini’s lawyer, William Bourdon, said his client was innocent of all charges and that he was being questioned on “technical grounds.”

The detention of the former football star was first reported by French investigative website Mediapart.

France’s national financial prosecutor’s office, which specialises in investigating economic crimes and corruption, has been leading a probe into the awarding of the 2022 tournament to the Gulf emirate since 2016.

It is looking into possible offences including private corruption, conspiracy and influence peddling.

“His lawyer, William Bourdon, would like to state as strongly as possible that this is not an arrest, but rather being heard as a witness by the investigators within a framework preventing those being questioned and heard from consulting each other during the process,” a statement issued on behalf of Bourdon and Platini read.

Officials with Qatar’s World Cup organising committee said they had no immediate comment.

FIFA, the world governing body of football, said it was aware of the reports concerning Platini, who is a former FIFA vice-president, but said it had no details on the investigation.

FIFA “reiterates its full commitment to cooperating with the authorities in any given country of the world where investigations are taking place in connection with football activities,” it said in a statement.

The decision in December 2010 to award the World Cup to Qatar surprised many given the lack of potential local audiences for the games, the extremely hot summer weather, and the poor performance of the country’s national squad. It will be the first Arab state to host the competition.

Le Monde newspaper reported that prosecutors were particularly looking into a lunch hosted by France’s then president, Nicolas Sarkozy, nine days before the vote that awarded the cup to Qatar. Platini and Sheikh Tamim Ben Hamad Al Thani, who was Qatar’s prime minister and is now the country’s emir, were guests at the lunch.

Platini has since acknowledged that he supported Qatar over a rival bid from the United States in the vote, but said Sarkozy “never asked him to”, the newspaper said.

Two of Sarkozy’s aides at that time, then Elysee secretary general Claude Gueant and Sarkozy’s adviser for sports Sophie Dion, were also questioned by police on Tuesday, judicial sources confirmed to Reuters. Dion remains detained with Platini. Gueant is a “free suspect”, the source said.

Under French law, suspects can be held for questioning for up to 48 hours.

Platini was forced to leave his job as UEFA chief after he was investigated in another case over 1.8 million Swiss francs ($1.8 million) that he received from FIFA in 2011. He was cleared in that case.

As a player in the 1970s and 1980s, Platini was a prolific striker, mainly for Saint-Etienne in France and Juventus in Italy.

He played in three world cups, captaining the national squad to the semi-finals in both 1982 and 1986, and leading France to victory in the 1984 European Championship.