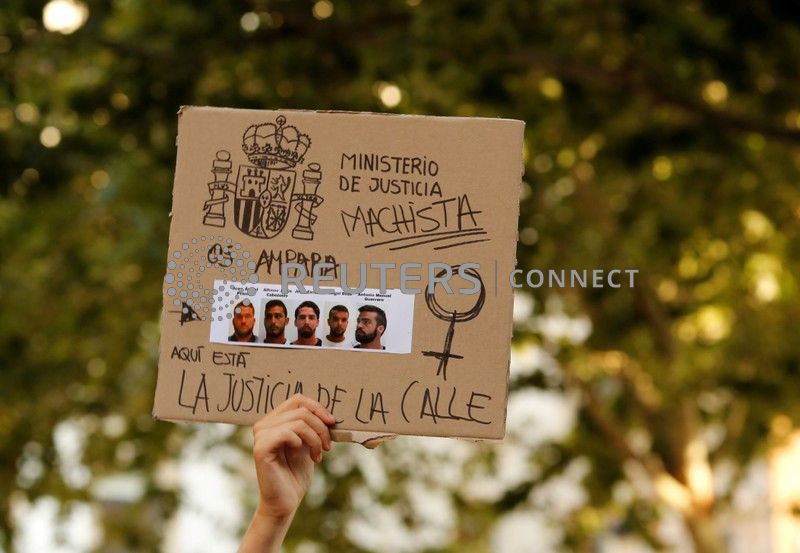 FILE PHOTO: A protester holds a sign during a demonstration against the release on bail of five men known as the "Wolf Pack" cleared of gang rape of a teenager and convicted of a lesser crime of sexual abuse in Seville, Spain, June 22, 2018. REUTERS/Marcelo del Pozo

MADRID (Reuters) – Three former Spanish soccer players were each sentenced on Thursday to 38 years in prison for gang raping a minor in 2017, the latest high-profile sexual violence case in Spain.

The three men, who at the time played for fourth division club Arandina FC, knew the victim was underage when they raped her in their apartment in Aranda de Duero in northcentral Spain, the judge said.

The issue of sexual violence has been thrust in the spotlight in Spain in the wake of several trials, including the so-called Wolf Pack case in which five men were sentenced for raping a teenage girl during Pamplona’s annual bull-running festival.

At issue in the Wolf Pack trial, as well as a string of others, was the fact that Spanish law currently does not legally recognise rape unless physical violence or intimidation is employed. The Socialist government has appointed a panel to review relevant parts of the penal code.

In the sentencing of the soccer players, the judge said the girl, who was less than 16-years-old at the time, was unable to react to the assault due to the disparity in age and physical strength between her and the attackers.

The attack took place with the lights off, taking the victim by surprise and creating an atmosphere of intimidation, the judge added.

Although the victim initially told friends and relatives on social networks that she was not raped, the court said it accepted her subsequent statement that she did not submit voluntarily to the men.

The three men were convicted for rape and for helping the other two take part.

Olga Navarro, the players’ lawyer, called the sentence “embarrassing” and said the court was imprisoning three innocent young men, who have denied any wrongdoing.

The men insist the girl was lying.

“We’re not rapists. We were naive and they’re trying to screw up our lives,” one of the men, Carlos Cuadrado, said after the sentence.

Another, Victor Rodriguez, said the sentence was the result of social and media pressure.

The sentence can be appealed.