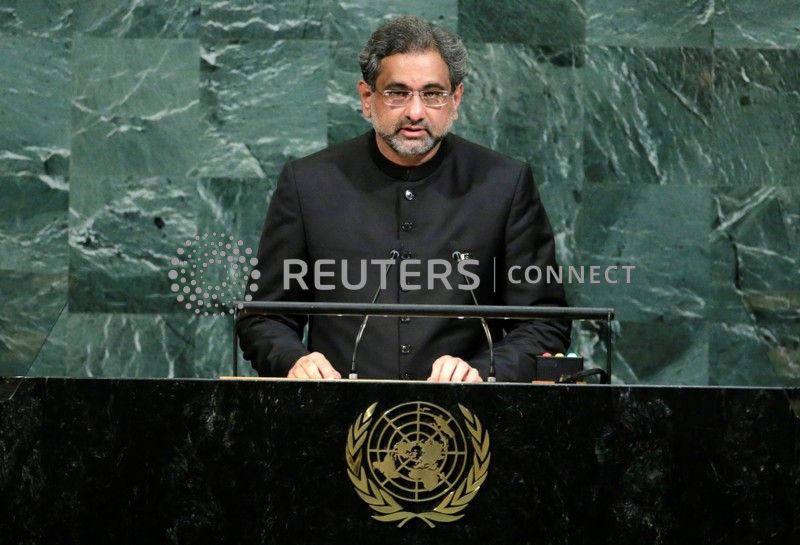 The National Accountability Bureau said in a statement that Abbasi had been detained in a case that was opened last year over a liquefied natural gas (LNG) terminal project.

The arrest, as Abbasi was on his way to a news conference in the eastern city of Lahore, further roiled a political scene already thick with accusations of corruption and abuse of office with opposition parties planning a day of protest next week.

“The government has buried Pakistan’s economy and (is) now arresting our leaders to divert the masses’ attention from the real issues,” Shehbaz Sharif, Pakistani opposition leader and head of Pakistan Muslim League (PML-N), told a press briefing in Lahore.

“We are not afraid of your fascist acts. Don’t think that you will gag our voices through such arrests,” he said.

Bilawal Bhutto Zardari, head of the Pakistan People’s Party (PPP), the other main opposition force, condemned Abbasi’s arrest as what he called part of a government “witchhunt” against elected representatives.

The PML-N was already engaged in a bitter stand-off with Khan’s government, which came to power last year accusing Abbasi and his predecessor, Nawaz Sharif, of large-scale corruption and mismanagement of the economy.

In 2017 the Supreme Court disqualified Sharif from holding public office over accusations that eventually led to a seven-year jail sentence for receiving undeclared income. Abbasi took over as premier and served for less than a year before losing an election to Khan’s Pakistan Tehreek-e-Insaf (PTI) party in 2018.

The PML-N accuses the government of being behind Sharif’s arrest and last week produced video footage that it said showed the judge who heard the case confessing that he had been blackmailed to ensure a conviction.

The judge denied the accusation but was sacked from his position with the Accountability Court.

The government has rejected opposition accusations of using the National Accountability Bureau, an independent body, to suppress its critics and opponents.

It says corruption by past governments is the main reason for an economic crisis that has forced Pakistan to seek a $6 billion loan package from the International Monetary Fund, its 13th IMF bailout since the 1980s.

Last year, the NAB ordered an inquiry against Abbasi, Sharif and others “for granting a 15-year contract of LNG terminal to a company of their liking in violation of rules and by misuse of their powers, which caused (the) national exchequer a loss of billions of rupees”.