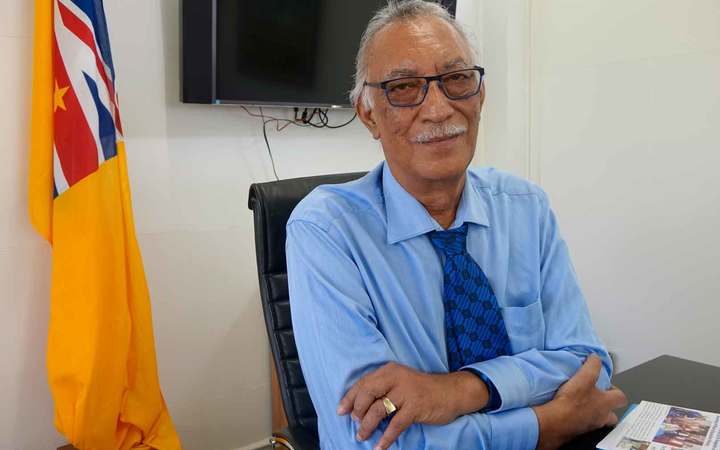 The four-term premier has been ailing for the past few years, to the point where much of his last year as premier was spent in New Zealand for medical treatment.

Sir Toke was flown to Auckland Hospital last week, but was returned by charter flight to Niue on Sunday – where he died two days later surrounded by family.

The government of Niue said it was Sir Toke’s wish to return and spend his final days on his beloved island Niue.

Born in Alofi in 1951, Toke Tufukia Talagi studied in New Zealand and held many prominent roles in both government and business, before being elected to the island’s assembly in 1999.

He became finance minister in 2002, and was elected premier in 2008, after he topped the common role.

He would be premier for 12 years – only being ousted last month, when he lost his common role seat.

As premier, he reformed the tax system, started relations with China, and drove initiatives for greater economic independence from New Zealand.

He was knighted in the 2017 New Year Honours, and Governor General Dame Patsy Reddy flew to Niue for a special investiture ceremony.

Sir Toke was voted out of the assembly in last month’s elections – having spent much of his final term in New Zealand with ill health, and after a damning report into government finances.

A prominent Niuean who worked for years with Sir Toke is Colin Tukuitonga, the former director general of the Pacific Community and now associate dean Pasifika Health at Auckland University.

He said that despite controversies, Sir Toke will be remembered as one of Niue’s greatest advocates.

“I think Toke was one of those unusual Niueans, he was very determined, he built himself a business enterprise from nothing, I guess you could say, and he was always someone who thought outside of the box.”

“I remember when the Niue hotel, when it was still going, was up for grabs, he tried to rally a number of us Niueans to try and buy it off as a co-operative.”

“He was always creative, he believed fiercely in Niue and Niueans doing more for themselves. I think he was rather impatient for some of the things that was going on and I know he did a lot, particularly for tourism in his term as Premier.

“In the early days, he was active in the region, he was very impatient of the role of the Pacific Islands Forum, for example he did a lot, and as I say as time went on he became unwell and I guess his energy levels declined but Toke was very creative, very determined to do what he wanted to do.

“I think he will be remembered for transforming, especially the tourism sector, in Niue. I think he was the most transformative of the most recent Premiers in Niue,” Dr Tukuitonga said.

In a statement, the government of Niue said Sir Toke will be remembered for his dedication to Niue and his commitment to “A prosperous Niue – Niue ke Monuina.”

It said his passion was the promotion of the Niuean language and education of our young people, the future leaders of Niue.

“We extend our condolences to his family and to the people of Niue. Sir Toke was an elder statesman of the Pacific and a long and close friend to New Zealand,” Prime Minister Jacinda Ardern said.

“He will be remembered for his lifelong commitment to safeguarding Niue’s future security and prosperity, as demonstrated by his steadfast championing of sustainable economic development, education, and the protection of Niue’s taoga (cultural treasures).

“I spoke with Sir Toke only a few months ago. We talked about Niue’s Covid response, the people of Niue and his recent book. He was fiercely proud of Niue, and rightly so. It was a place he dedicated his life and service to.

“Our thoughts are with the people of Niue,” Jacinda Ardern said.