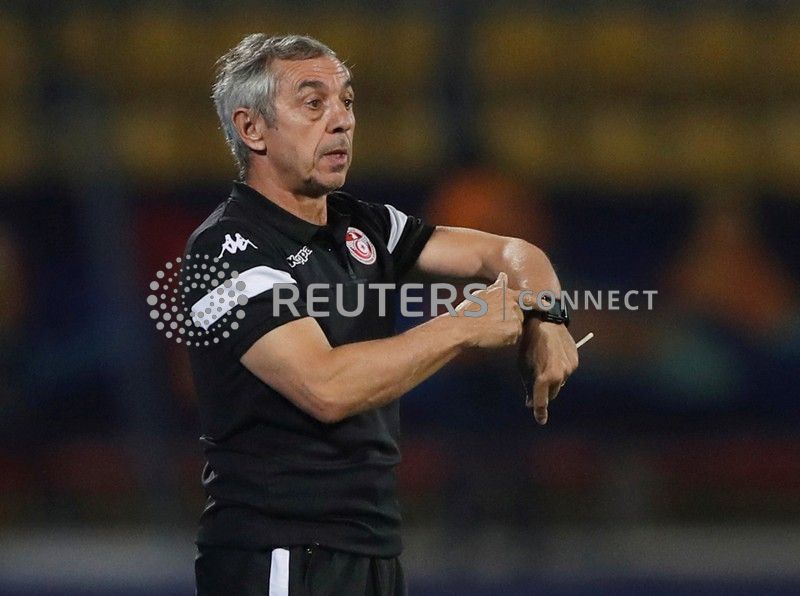 CAIRO (Reuters) – As a player, Alain Giresse was part of a midfield known as the Magic Square that lifted France to some memorable performances during the 1980s, which included winning the European championship.

His coaching career has also been remarkable — though not quite in the way such a great player might have expected.

In the last 15 years of working around Africa, the 66-year-old Tunisia coach, who is at his fifth Africa Cup of Nations finals, has been caught up in a coup, needed police protection and suffered what he described as a manhunt.

But, after all that, he finds himself within touching distance of a major title, with his side having reached the semi-finals where they meet Senegal on Sunday.

Alongside Luis Fernandez, Jean Tigana and Michel Platini, Giresse was part of the most eye-catching midfields France has ever had. He is often remembered for his goal in the epic World Cup semi-final against West Germany in 1982 and a celebration that is etched into the competition’s history.

His coaching career began with two stints at Toulouse, winning promotion to the first division each time. He then spent two years with the Georgia national team before moving to Africa.

The first stop was Gabon where he nearly quit following a furious reaction to a loss against Cameroon.

“I experienced the anger of the public. I don’t feel safe. We’ve been threatened,” he said at the time. “Police had to ensure our exit from the stadium and I was the first one targeted.”

Yet, he was persuaded to stay on and helped them qualify for Afcon in 2010 after missing four consecutive editions.

Two years later, he led Mali to an impressive third place but shortly afterwards found himself in Bamako during a coup and was holed up for several days before he was able to leave for France.

But it was contract terms that prompted him to resign. “It impeded my independence,” he said. “I had to give a list of players for approval and the medical staff was no longer under my direction.”

He was back at the Afcon with Senegal three years later but a group stage exit left Giresse fearing more violence — this time from the media.

“They went beyond the limits of decency,” he said. “It was of such verbal violence, and it could have spilled over into physical violence. They almost threw themselves on me at the end of the press conference. It was a man-hunt.”

He returned with Mali in 2017 but they went out in the group stage.

This time, his Tunisia side produced lacklustre performances as they drew their three group games before beating Ghana on penalties in the round of sixteen, helped by an inspired move from Giresse.

The coach brought on reserve goalkeeper Farouk Ben Mustapha just for the shootout and the substitute saved a spot kick to send his side through.

They finally won a match inside 90 minutes on Thursday by beating Madagascar 3-0, the first time that a Giresse-coached side has scored three goals in a match at the finals.

“Now, we are the stage of the competition that Tunisia has waited for many years,” said Giresse. “It was our objective, now we have to go as far as possible.”

“We want to finish this competition in style.”