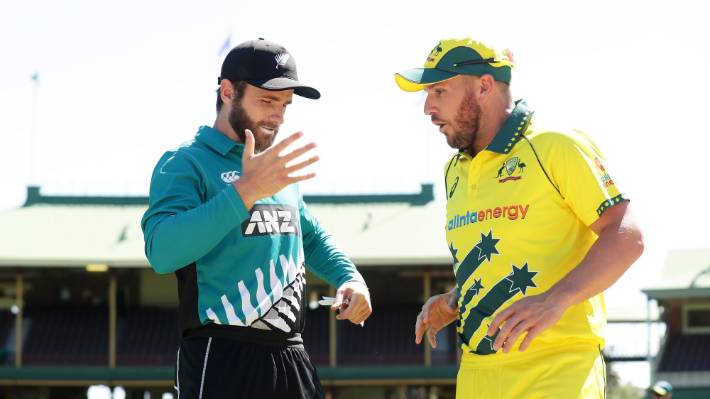 Captains Aaron Finch of Australia and Kane Williamson of New Zealand are likely to meet again some time in the home summer. GETTY-IMAGES

Former New Zealand captain Brendon McCullum is set to be Spark Sport’s star commentary signing as part of its promised “fresh look and feel” to cricket broadcasts for the next six years.

The big unknown is when – and against which opponents – that first live stream of the Spark Sport cricket era happens as the world grasps the impact of Covid-19. In New Zealand the key will be border controls and whether touring squads of 15 players plus staff are permitted.

For now, head of Spark Sport Jeff Latch says they’re still planning for an October start, when West Indies and Bangladesh were pencilled in for Twenty20 series to open the home season.

Cricket Australia last week confirmed a visit by West Indies in early October which could potentially tie in with a New Zealand tour, while trans-Tasman bubble partners Australia are guaranteed visitors at some stage of the season. The men’s and women’s Super Smash looks ever likely to feature Black Caps and White Ferns stars, too.

Latch said stage one for Spark was to lock in a production partner for the next six years from the world’s major cricket production companies. Operational and technical crews would be largely New Zealanders who had experience as freelancers with Sky.

Then the commentary team will take shape, with some names already circulating but no contracts yet signed.

Stuff understands conversations are well advanced with McCullum who commentated for Sky and Channel Seven in Australia last summer. He proved a robust observer across the Tasman, not scared to criticise aspects of his underperforming former team, and his commentary duets with former Australian skipper Ricky Ponting made compelling viewing.

Asked about McCullum’s potential addition, Latch said: “We are still in the process of finalising our commentary team and will announce the commentary team in the coming months.”

One thing appears true: Spark won’t be cramming the box with former internationals and there will be minimal crossover with Sky’s former lineup. Diversity is a focus along with some more recent internationals, and an emphasis on what Latch describes as quality storytelling.

“It’ll be a mix of faces that are some of the best people that viewers know and love today, as well as some new, fresh faces. It will be a blend.

“One thing we believe in strongly, that it’s important to have a mix of ex-players and professional sports broadcasters.

“They bring slightly different skills to the equation and our view is you need a mix of the two to actually deliver really world class coverage and that’s what we’re looking to do.”

Scotty Stevenson, lead commentator for Spark’s Rugby World Cup coverage, will be one key part of the team, Latch said.

Then there’s the actual viewing part, for cricket fans accustomed to one pay TV channel for all their live viewing. Sky retains the rights for matches played in Australia and ICC events, while Spark will stream all matches in New Zealand with TVNZ its free-to-air partner for “selected T20 internationals and Super Smash matches”.

The Rugby World Cup – Spark Sport’s first deep dive into a major sporting event for New Zealanders – stands them in good stead, Latch insists. Some complaints were loud around picture quality, seemingly influenced by varying bandwidth in some households, while other viewers reported no problems and gave the coverage a tick of approval.

“There’s a correlation between rugby and cricket fans and we know there’s over 200,000 households who’ve already taken Spark Sport for RWC which is a huge plus looking forward to cricket season.”

Latch said one positive of the Covid-19 lockdown was Kiwi households getting “streaming fit” to work from home or watch online series and movies.

Whether some rural areas are suitably equipped for a smooth, uninterrupted picture is one ongoing question. Latch points out the rural broadband initiative co-ordinated by the Government and major telcos has been prioritised over the next year.

“The messages are the same as what they have been for the last few months. Cricket fans should come in early and get themselves set up, and not leave it till the 11th hour. That’s what caused us the biggest challenge when we look at some of the events we held last year.”