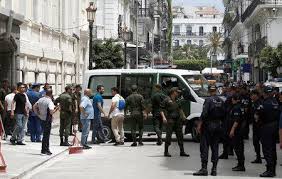 ALGIERS (Reuters) – Two former powerful Algerian officials and a prominent businessmen were questioned in courts on Sunday, state TV said, over accusations of corruption in the ruling elite under ex-president Abdelaziz Bouteflika.

Protesters and the army drove Bouteflika to resign on April 2 after two decades in power, but pressure has continued for the departure and prosecution of senior figures around him.

Among a plethora of ongoing cases, former finance minister Karim Djoudi appeared before the Supreme Court on Sunday, while former prime minister Ahmed Ouyahia was in another Algiers court, both over corruption accusations, state TV said.

Mourad Eulmi, head of the Algerian family-owned firm SOVAC which runs an assembly plant with Germany’s Volkswagen AG, was also questioned in the same court as Ouyahia.

State TV gave no more details and there was no immediate statement from the men or lawyers representing them.

The army is now the main player in Algerian politics and its chief of staff Ahmed Gaed Salah has urged the judiciary to speed up the prosecution of people suspected of corruption.

The court cases have not dampened the zeal of protesters pushing for radical change and a clean break with those who have governed since independence from France in 1962.

Djoudi served as finance minister under Ouyahia from June 2007 to May 2014 when he resigned on health grounds, before being named Bouteflika’s adviser for the past two years.

Bouteflika’s youngest brother, Said, and two former intelligence chiefs are in custody accused of “harming the army’s authority and plotting against state authority”.

Other prominent businessmen have also been detained at a prison in Algiers over corruption allegations.

Protesters are now seeking the departure of interim President Abdelkader Bensalah and Prime Minister Noureddine Bedoui, whom they view as part of the establishment.

Authorities have postponed a presidential election previously planned for July 4, citing a lack of candidates.

No new date has been set for the vote.