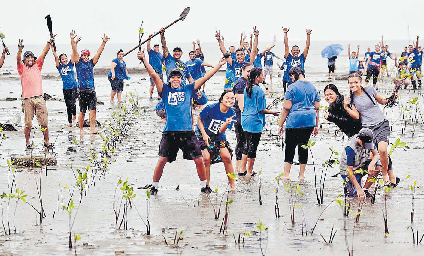 Promoting their school motto of leaving the world better than before, former students of Adi Cakobau School took to the Lami foreshore with their families to plant mangrove seedlings.

Despite the rainy conditions that presided in Suva early yesterday, the school’s class of ’98 spokeswoman Vani Catanasiga commended the turnout yesterday, adding it was in line with the school’s 72nd anniversary celebrations.

Ms Catanasiga said even though the school’s birthday fell on the 4th of this month, they had decided to do something different this year to also commemorate Fiji’s 50th independence anniversary celebrations.

“We had over 60 people who turned out at the event, mostly children of old scholars and their partners and husbands which was very encouraging,” she said.

Also present at the event was Ministry of Forests director George Vuki who commended the effort, adding it contributed to Fiji’s “30 million trees in 15 years” initiative.

Mr Vuki said the ministry could not achieve the immense task alone.

“This is why we choose to work hand in hand with communities and interested groups to ensure that we can plant these trees and most importantly sustain our environment for our future generations”.

The mangrove replanting exercise was carried out at the beach along Tikaram Park in Lami.