Forget his age, Gatlin is ready to battle for another world title 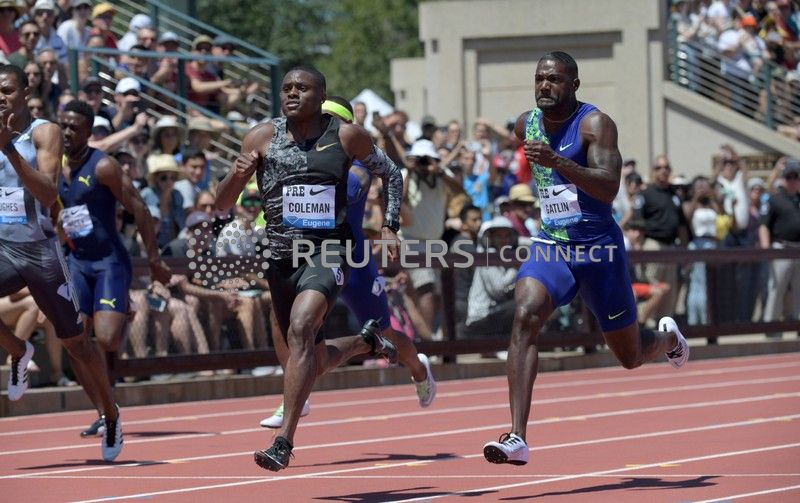 (Reuters) – Justin Gatlin has made it clear he is not going to give up his world 100 metres title without a fight despite the emergence of much younger sprinters.

The 37-year-old American told Reuters he will battle “tooth and nail” for a third world crown in Doha in September after running a surprising 9.87 seconds at last weekend’s Prefontaine Classic where he finished second to compatriot Christian Coleman’s world-leading 9.81.

“I never stop to think about my age really. I just listen to my body and it tells me if I can or can’t,” Gatlin said via email on Wednesday from Lausanne where on Friday he will face Americans Mike Rodgers and Cameron Burrell in a 100.

Yet even the two-time world champion admitted it was unusual to be running that fast at that age.

“Usually everyone fast is young,” said the 2004 Olympic champion. “But I don’t let age define my ability and drive to be the best I can.

“Being the fastest/oldest is a crazy title to have.”

While Americans Coleman, age 23, Noah Lyles (21) and Michael Norman (21) have dominated global sprint headlines this season, Gatlin bolted into the picture with his Prefontaine performance at Stanford University, the fourth fastest 100m of the year.

“I was injured earlier in the season so I lost out on strength and speed work,” said Gatlin, who experienced a micro hamstring tear while running a 200 metres in Grenada in April.

The Lausanne race will be the first of two in Europe before Gatlin returns to the States for the American championships and world trials in Des Moines, Iowa, on July 25-28.

As for the U.S. trials, the plans now are for Gatlin to run only the first round of the 100 to show required fitness since he has a wild card to Doha as the defending world champion.

“Tooth and nail,” Gatlin said of the intensity he plans to mount at the championships.

“I know I can. It will help inspire so many people, young and old.”

But realistically, what are his chances?

“You overlook him at your peril,” four-times Olympic sprint medallist Ato Boldon told Reuters in a telephone interview.

“He’s not going to go through Europe running 9.8 everywhere, but he’s the world champion and he looks like he is ready to make a good defence of it.”

A lot depends on how fast Coleman and others run.

Another medal of any colour would give Gatlin eight global 100m medals, six of them since 2012.

“Because he has remained so technically consistent and he is always been a big meet performer, that’s why he has the most medals in the 100 for the United States over the last 10 years,” said Boldon.