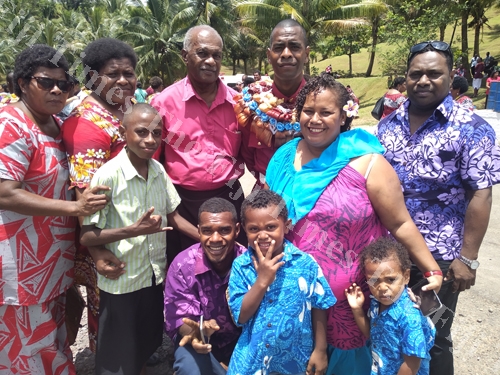 ISIKELI Vaileba would not have become what he is today without his grandfather’s hard work and dedication.

The Nadroga native was among the 79 recruits who successfully completed 14 weeks of basic recruit training at the Fiji Corrections Service training academy in Naboro.

He dedicated his achievement to his grandfather Naibuka Nacei who had always been his pillar of strength before the completion of his 14-week training.

The 25-year-old said his grandfather had always motivated him to become a better person.

He said if it wasn’t for the strong and spiritual upbringing of his grandfather, he wouldn’t have been one of the 79 recruits.

“Sometimes I just look back and see how grateful I am to have such a caring and loving grandfather who was always behind me in everything I did,” he said with tears.

“I cannot say how happy I am today, and all thanks to the Man above and my grandfather.”

Mr Vaileba said it wasn’t an easy journey for him after he finished high school back in 2014.

He revealed how he was once a drop-out from school because of peer pressure.

But with the strong lectures and telling off he got from his uncle and his grandfather, Mr Vaileba was able to pick up the pieces and continue with his education until he completed it.

He also said after completing his secondary education, he decided to take a year’s break which he still regrets until now.

But with a motto that goes “try your best until you succeed at last” which always lingered in his mind, Mr Vaileba kept pushing until all his hard work paid off.

“I am the person I am today because of all my family who were rallying behind me.”

Mr Vaileba said for once he tried travelling overseas to his aunty to study but proved futile.

From that day, he said, he had lost hope not knowing what God had already planned for him.

He said he was also thankful to his cousin (brother) who had helped him with his documents and helped him apply for the corrections officer position which was advertised in the dailies.

He said the 14 weeks of training was very demanding, challenging and educational for him.

“Whenever I lost hope I had always reminded myself the reason why I came here in the first place,” he said.

Mr Vaileba said he would be the first person in his family to become a corrections officer.

“I can say I come from a family background where my aunts and uncles are nurses, achieving this is quite different from it and I am happy about it.

“Now it is time to focus on what is ahead of me and I won’t stop here; I will keep trying my level best to reach the highest rank in this field.”

“My achievements are for all my family members, my mum and my younger siblings and as well my uncle and aunt from overseas and not forgetting my son,” he added.