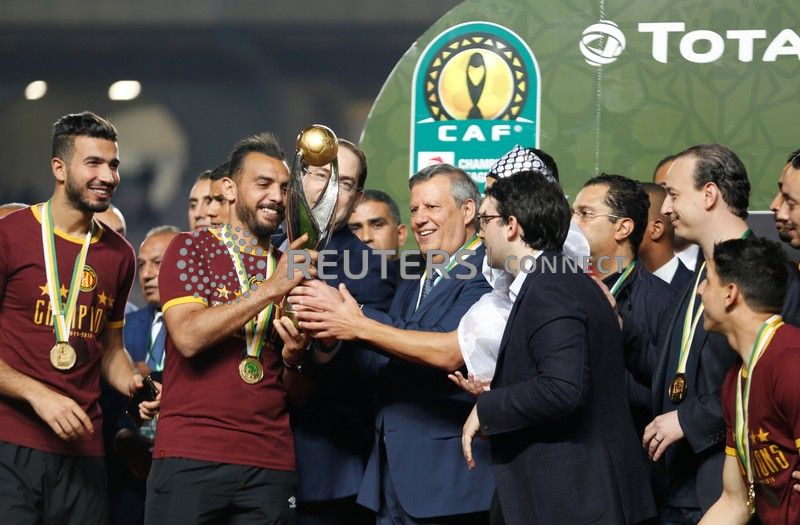 CAPE TOWN (Reuters) – African football’s image took another hefty blow on Friday when the final of the continent’s top club competition was abandoned after Wydad Casablanca of Morocco walked off to protest a refereeing decision.

Amid embarrassing scenes in Tunis, home side Esperance were declared winners of the African Champions League but it took a stoppage of an hour and 25 minutes before the match was abandoned and they could claim the trophy.

The Confederation of African Football have called a meeting of their executive committee for Tuesday to discuss the incident, it said in a statement on Saturday.

Wydad, who were 2-1 behind on aggregate, thought they had equalised just before the hour mark but the header from Ismail El Haddad was disallowed for an infringement.

Wydad players immediately surrounded the referee demanding he review the decision and consult the Video Assistant Referee, which was being used for only the fourth time in an African club competition game.

Wydad substitutes and coaches ran onto the pitch to confront the referee while a train of officials came to the side of the field to try to resolve the situation.

Even CAF President Ahmad spent almost 30 minutes in discussions with officials in a futile effort to get the game restarted.

A crowd of 60,000 was left waiting before the referee finally declared the contest in favour of the home team, who retained the title.

VAR proved contentious in last week’s first leg in Morocco with CAF this week banning the referee Gehad Grisha of Egypt for six months after complaints from the Moroccans.

Wydad could now face a two-year ban from competing in continental club competition but a long history of leniency from African football’s governing body has undermined the effect of most of their past sanctions.

Violence has also become commonplace and last month a referee was attacked at the end of an African Confederation Cup semi-final.

There are also concerns about the Africa Cup of Nations, which kicks off on June 21 in Egypt, where match officials are often subjected to abuse.