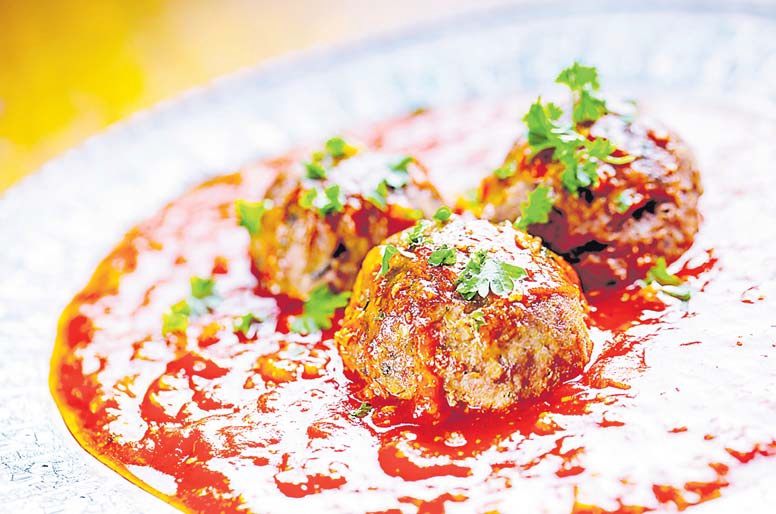 WITH diets and immunity on the minds of many people as added defence and healing power against COVID-19, herbal medicine and fresh produce are increasingly being suggested to be incorporated into the daily diet. Vevedu juice is seemingly having a positive effect on those recovering from sickness and those wishing to boost immunity with traditional herbs.

However, like most traditional medicines, they are not a cure for severe diseases like COVID- 19 but they can help to ease pain and fasten recovery. Boosting your body’s immunity and defences with traditional medicines and more fresh produce is highly recommended for everyone right now.

Markets have an abundance of fresh foods, but sometimes we need to think of new ways of cooking to relieve the boredom. We all love and enjoy our local foods, but every now and then the family wants to try something different. Asian, Indian and Fijian cuisine are staple foods in the home, but another ancient culture gives us insight into how we can adapt local ingredients into completely new dishes.

Unlike many other ethnic cuisines, Mediterranean cuisine is not the product of a specific ethnic group, country or culture. Instead it is a label referring to the culinary trends shared by a diverse array of peoples that live in the region around the Mediterranean Sea. This body of water was an important route for merchants and travellers during ancient times as it allowed for trade and cultural exchange between emergent peoples of the region.

Where is the Mediterranean?

Several ancient civilisations were located around its shores; thus, it has had a major influence on those cultures. It provided routes for trade, colonisation and war, and provided food for numerous communities throughout the ages. This inland sea is bordered on the north by Europe, the east by Asia, and in the south by Africa.

The countries surrounding the Mediterranean in clockwise order are Spain, France, Monaco, Italy, Slovenia, Croatia, Bosnia and Herzegovina, Montenegro, Albania, Greece, Turkey, Syria, Lebanon, Israel, Egypt, Libya, Tunisia, Algeria, and Morocco. Malta and Cyprus are island countries in the sea, with the Gaza Strip and the British Overseas Territories of Gibraltar and Akrotiri and Dhekelia have coastlines on the sea.

The typical Mediterranean climate is hot, with dry summers and mild, rainy winters. Major crops of the region include olives, grapes, oranges and tangerines.

The world’s earliest civilisations bordered the Mediterranean Sea, their development bolstered by the rich soil and temperate climate that made agricultural production thrive.

Traders exchanged cultural commodities like spices and other food goods, resulting in the wide dissemination of certain ingredients throughout the cuisines of these disparate peoples. It was through this form of cultural interaction that certain fundamental elements of Mediterranean cuisine became popular throughout the region. Conquest was another factor in shaping Mediterranean cuisines. The different cultures of the Mediterranean came into direct contact as a result of the empire-building efforts of various civilisations.

Once one civilisation overthrew the government of another, they often imposed their own cultural practices upon the conquered society. As societies blended together within the empire, culinary practices were adapted and conformed, resulting eventually in the adoption of the current culinary identifi ers of the Mediterranean cuisine by people throughout the region.

The most universally used and prevalent ingredient in the cuisines of the Mediterranean is olive oil.

Olive trees are prevalent throughout the region, and the distinctive oil is a major export of many Mediterranean countries.

Fresh vegetables dominate Mediterranean cuisine, with a wide variety taking centre stage in dishes throughout the region. While there is some cultural variation, eggplant, artichokes, squash, tomatoes, legumes, onions, mushrooms, okra, cucumbers, and a variety of greens and lettuces all flourish in this region and are commonly used. Meat is generally used sparingly in Mediterranean cuisine, and, in most of the Mediterranean, tends to be grilled.

The Mediterranean’s rocky terrain can’t typically support larger herding animals like cows, limiting meat options to smaller domesticates like goats, sheep, pigs and chicken, as well as some wild game. Goat and sheep milk are also used in a variety of Mediterranean dishes, primarily in the forms of yogurt and cheese.

As in the Pacific, seafood is a more prevalently used protein source, appearing in a variety of dishes. But one of the biggest contrasts compared to traditional Fijian cuisine is the dominant use of herbs to flavour foods. Mediterranean recipes use basil, oregano, thyme, rosemary, marjoram, parsley, dill, mint, garlic, tarragon, fennel, cilantro, and saffron.

These herbs not only imparted flavour but herbaceous medicine too.

Although there are common elements that unify the cuisines of the Mediterranean, there are some signifi cant regional and cultural differences.

The flavours of parsley, sumac, mint and lemon juice dominate the Eastern Mediterranean cooking palate, while pomegranates and nuts are regular ingredients in sauces and spreads. Southern European cuisine, which is found in Italy, Southern France and Spain, contains specific ingredients that distinguish it from the rest of Europe’s cooking traditions and other Mediterranean countries.

Unlike other Mediterranean cuisines, wine is a prominent element of Southern European dining, both as a flavour enhancement in cooked dishes and on its own. Pork is also consumed more by these countries than the rest of the Mediterranean, and is more prevalent than goat, mutton or lamb. Tomatoes, garlic, capers, anchovies, mustard, anise and pine nuts are used in a variety of combinations to flavour Southern European dishes.

A multitude of different grains are consumed: leavened breads, pasta, and rice are staples. North African cuisine is characterised by an abundant use of spices. Morocco, Algeria, Tunisia, and Libya all regularly use cumin, coriander, saffron, cinnamon, cloves, chilies, saffron, and paprika in their cooking traditions. Harissa and ras el hanout are two fiery spice mixtures used predominantly in Moroccan cuisine, giving a characteristic heat to stews and sauces.

Dried fruit like dates, apricots, and raisins make frequent appearances in North African cuisine, both on their own and in cooked dishes.

Preserved lemons add a characteristic salty, brined pungency to North African food. Couscous, granular semolina that has the appearance of bulgur wheat with a ricelike texture, is a popular North African grain, accompanying a variety of stews and meat dishes. Lamb, mutton, and goat meat are the dominant protein in North African dishes, although chicken, and even beef, make regular culinary appearances.

The Moroccan tagine, a slow-cooked stew of meat, vegetables, and sauce prepared in a conical-shaped ceramic pot, is perhaps the most recognisable and popularised of North African dishes: an aromatic, hearty, well-balanced dish.

The Mediterranean diet is considered one of the healthiest on the planet, with fruits, vegetables, legumes, herbs and spices dominating the food pyramid. Ironically, the Mediterranean diet pyramid is upside down compared to how many Fijians eat, with meats and sweets eaten in very small amount. Learning to use more herbs in your cooking helps to make dishes more flavoursome without adding excess salt, and when combined with eating more fresh produce, Mediterranean cuisine offers fresh new ways to eat healthily. 

Lance Seeto is the host of FBC-TV’s Exotic Delights and owner of KANU Restaurant in Nadi.