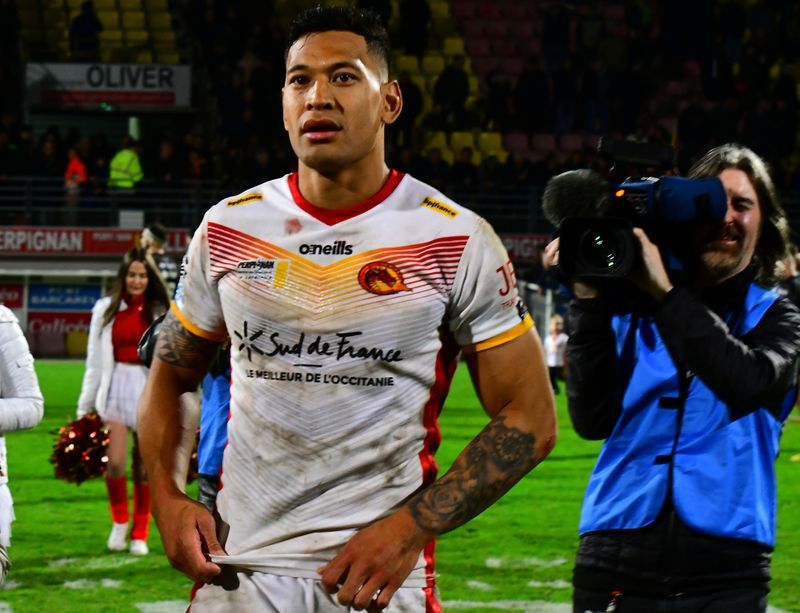 (Reuters) – Israel Folau took just six minutes to score his first try for Catalans Dragons as the controversial Australian received a warm reception on a victorious debut for the French-based Super League team on Saturday.

The ex-rugby union international, who was sacked by Rugby Australia last year for his homophobic comments on social media and whose switch to European rugby league has outraged many in the game, scored in his team’s 36-18 win over Castleford Tigers.

In his first rugby league match for a decade, Folau’s early score, after he had taken a high catch, was met with cheers from the home crowd at the Stade Gilbert Brutus in Perpignan and he almost scored a second before halftime.

Dragons’ fans in the crowd of 8,886 chanted “Izzy! Izzy!” when Folau scored his try and he was mobbed by his team mates.

At the end of the match, Folau held up his hands to the crowd in appreciation before stopping to take selfies and chat with supporters.

One woman fan said she had been asked twice to remove a rainbow flag by home stewards but there were no organised protests over his Super League participation, which have been promised by other clubs’ fans when Folau plays in Britain.

The Catalans’ signing of the 30-year-old, who scored 37 tries in his Wallabies’ career, has been met with much criticism within the sport.

Earlier this month, the Super League’s board voted to ensure they had greater authority over stopping similar “controversial signings”.

Folau, who had been warned about homophobic comments previously, had his Rugby Australia contract terminated last May after saying on social media that “hell awaits” gay people.

In December, he reached a settlement with Rugby Australia after suing them for A$14 million for alleged religious discrimination.

Folau is set to play his first match in England against Hull at the start of March.