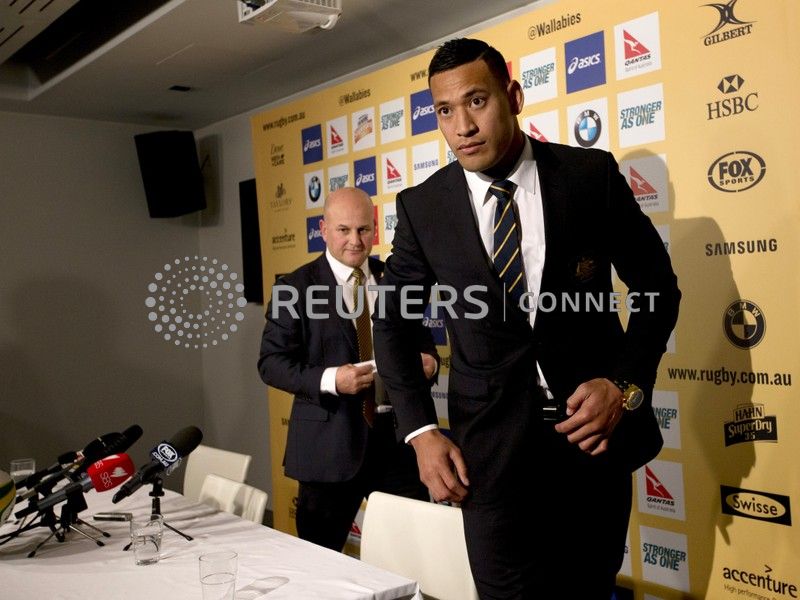 SYDNEY (Reuters) – Five weeks after they first committed to sacking Israel Folau, Rugby Australia finally terminated the Wallabies fullback’s contract on Friday on the recommendation of a disciplinary panel that decided he had breached their rules on inclusion.

The protracted saga was sparked by Folau’s Instagram post on April 10 that said hell awaited “drunks, homosexuals, adulterers” as well as others the fundamentalist Christian considered sinners.

The three-strong panel had earlier adjudged that Folau had committed a high-level breach of the players’ code of conduct and on Friday RA chief executive Raelene Castle said she had accepted their verdict on a sanction.

“While Rugby Australia accepts the panel’s decision to terminate his player contract for his breach of the code of conduct, we want to stress that this outcome is a painful situation for the game,” the New Zealander told reporters.

“Israel, through his actions, left us with no choice but to pursue the course of action resulting in today’s outcome.

“When players sign a contract with the Wallabies, they sign up to the values of the team and the sport.

“Israel is a great rugby player. We are disappointed and saddened by the fact that he will not be seeing out his four-year contract and commitment to the Wallabies and also the (New South Wales) Waratahs.”

Folau, who has 72 hours to appeal the ruling, said he was “deeply saddened” by the decision and was considering his options.

“It has been a privilege and an honour to represent Australia and my home state of New South Wales, playing the game I love,” the 30-year-old said in a statement.

“The Christian faith has always been a part of my life and I believe it is my duty as a Christian to share God’s word. Upholding my religious beliefs should not prevent my ability to work or play for my club and country.”

Folau shared a similar post targeting gay people last year but escaped sanction and signed a new four-year contract, reported to be worth A$4 million (2 million pounds), in February.

Castle said Folau had since last year’s post been warned repeatedly, both personally and through his manager, of RA’s “very clear expectations” about his social media use.

The decision leaves Australia coach Michael Cheika without one of his few world class players only a few months out from the World Cup in Japan.

A high profile recruit to the sport in 2013, the former rugby league international and Australian Rules player last month became the top try-scorer in the history of Super Rugby.

Folau’s potential sacking triggered a wider debate in Australia about freedom of speech and religion, becoming a minor theme in the run-up to Saturday’s federal election.

Castle said it was a far more straightforward issue.

“This is a contract dispute about an employee signing a contract,” she said.

“He signed up to the terms of that contract and understood what the contract entailed and he breached the contract.”

The religious aspect also caused some issues with Folau’s fellow players of Pacific islands heritage, many of whom are also committed Christians, with one suggesting earlier this month that it could drive a wedge in the Wallabies team.

Castle said that she was “100% confident” that would not happen.

“I’m confident because those players understand that everybody has a right to their own views on religious beliefs, and as long as they continue to express them in a respectful way we will continue to support them,” she said.

“And I have absolute confidence that Michael Cheika will build a rugby team that is incredibly competitive for the World Cup.”

Castle said any discussions over a settlement had not proceeded beyond the two teams of lawyers and that given Folau’s lack of remorse — the offending post is still on his feed — it was unlikely he would ever play for Australia again.

“This decision sends a strong message that homophobia and transphobia will not be tolerated in rugby union,” co-founder Andrew Purchas said in a statement.