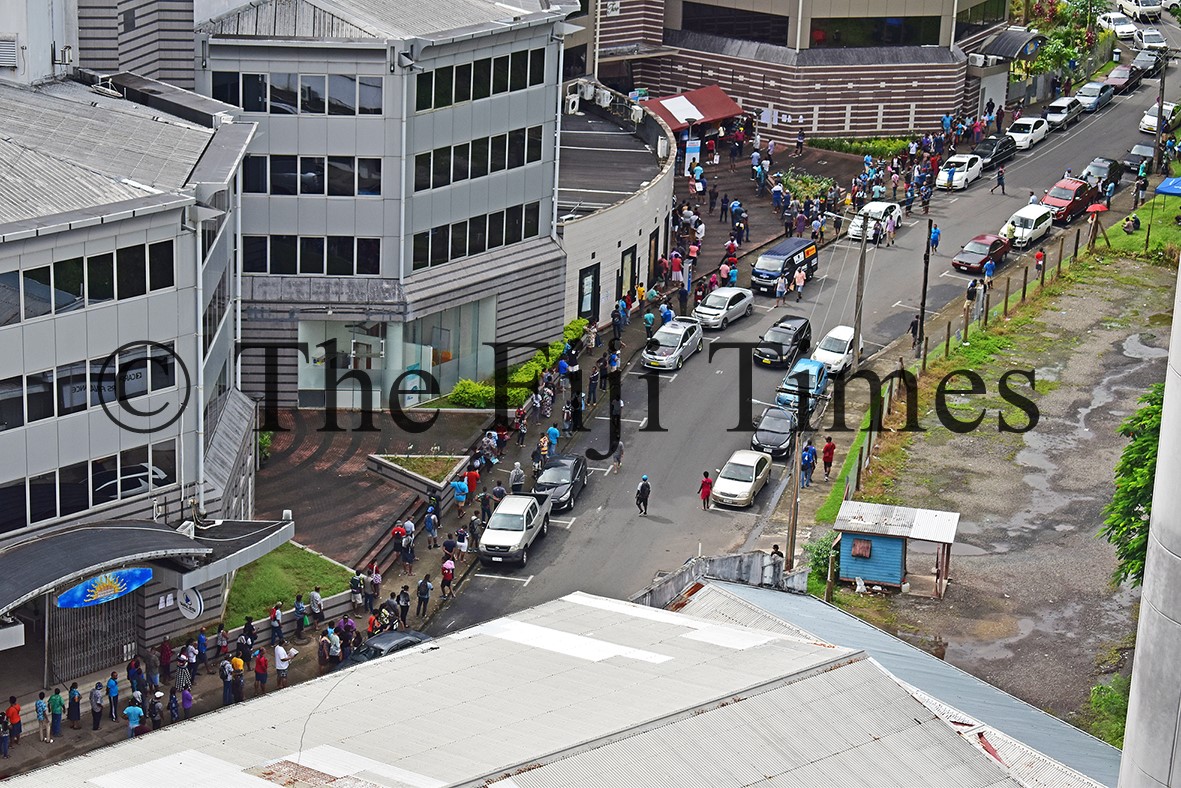 FNPF members line up outside the Fund headquarter in Suva seeking assistance as a result of the COVID-19 pandemic situation in the country. Picture: FT FILE

IN 2011, I wrote an article warning about worrying developments at FNPF.

That article was published in the New Zealand outlet Pacific Scoop as FNPF bakes pie in the sky.

That horrible nightmare now appears to have become real in 2021, going by the daily current debates in Fiji concerning FNPF’s role in financing Fiji Airways and FSC.

For Fiji Airways, COVID-19 was of course the tipping point.

That 2011 article is presented below without any significant changes. It suggests that 10 years later, Fiji did not learn from past mistakes.

TWO recent media releases indicate that the FNPF board and management (at the instigation of the military government) are digging the hole deeper for FNPF, with no accountability to the owners of FNPF.

The first is the bad restructuring of the $303million loan by FNPF to Natadola Bay Resort Ltd (NBRL). The second is the massively risky $200 million loan to help Air Pacific buy three Airbuses in 2013, completely contradicting the most recent advice by its recent consultants (Promontory) on sound investment policy for FNPF.

Why interest-free indefinite loan to NRBL?

The 2011 FNPF Report states that the $303million loan to NBRL is being restructured so that while $100million will draw interest of 8 per cent pa, the remaining $203million will become an indefinite loan, and interest free.

FNPF will effectively, in its accounts, give a $16 million subsidy annually to NBRL — some 40 per cent of the total value of all the pensions currently being paid annually.

This is terrible accounting practice for three reasons. First, any decent accountant or economist would advise that all transactions between a parent company and a subsidiary should be done at ‘arm’s length’ with subsidiaries being charged the same interest rate that other borrowers are being charged.

To convert $203 million into an interest free loan will artificially increase the apparent profitability of the subsidiary (NBRL), while reducing the apparent performance of the rest of FNPF.

Second, by not charging interest on the large loan, NBRL is being given no incentive to repay the loan as soon as possible- especially when it is ‘indefinite’.

Third, if in future, the military regime’s forced takeover of private assets at Natadola vested in NBRL by military decree is legally and successfully challenged, then the assets of NBRL will become logical targets for litigants.

The books for NBRL should therefore show its true worth — not artificially inflated through interest rate subsidies given by FNPF, which may then be claimed in future by legitimate litigants.

Which financial institution in the world gives an interest-free indefinite loan like this?

Who dreamt up this scheme?

Who in FNPF management agreed to go along with this?

Why would FNPF board members agree to this subterfuge to show the NBRL in a better light? Is it to allow more ‘write-backs’ on asset value of this bad investment?

Another far more dismaying media announcement has been the $200 million loan by FNPF to Air Pacific.

If the current management at Air Pacific know what they are doing this loan may turn out OK for FNPF.

But for FNPF owners who are already facing a massive cut to their pensions, there are many dismaying aspects to this incredibly risky loan.

First, the FNPF management and board have no capability to assess whether this proposed investment of more than a billion dollars by Air Pacific will be a sound investment, in an incredibly complex and competitive aviation market, in which Air Pacific is just a minor player, already floundering.

If Air Pacific’s future is so good, why has Qantas been wanting to sell its more than 40 per cent shares in Air Pacific?

(Air Pacific CEO) David Pflieger is surely talking with tongue in cheek when he says he had to ‘work hard’ to convince FNPF of the soundness of the loan.

He is surely talking with tongue in cheek that he had to give a premium interest to FNPF in order to secure the loan.

Why then were the Fiji commercial banks, which are also flush with money, not convinced by the premium interest?

Because, like any sensible business person, they know that the presumably higher interest rate paid for a few years, is not good enough if the borrower goes bust and a large part of the principal is not repaid.

Second, no commercial banks have as yet agreed to lend the money. The FNPF loan is instead being used as a ‘deposit’ or ‘collateral’ in order to facilitate loans from European credit agencies. This is terrible business practice for FNPF.

It should be the other way round: If they were to give a loan at all, FNPF should wait until the private commercial lending agencies, who are financially far more astute in lending to airlines than FNPF management and Board, have put in their $800million, on which FNPF could then piggy-back with $200millions.

For FNPF to fork out the initial $200millions as deposit or collateral would suggest that the European credit companies were not prepared to trust Air Pacific’s own financial projections on the viability of their billion dollar purchase.

Would the European credit companies trust FNPF’s judgment of the viability of the proposed Air Pacific purchase, enough to give a billion-dollar loan? Of course not.

So why may European credit companies be more inclined to give the $800million loan if FNPF throws in $200million which is only 20 percent of the total purchase price of the three planes? There are at least three reasons.

First, in the global aircraft manufacturing market, the biggest rivalry is between Airbus (backed solidly by Europe), and Boeing (backed solidly by US). Of course, European credit companies (with prodding from their governments) will try to facilitate any loan to purchase the three Airbuses.

Second, they would know that once FNPF is hooked into the loan, our ‘cash cow’ (which annually receives 16 per cent of the total wages and salary bill of the country), can be called on for more funds to be thrown down the well should Air Pacific not be able to repay the loan.

Third, they also may have an understanding that the military government will pledge Fiji taxpayers’ money to under-write Air Pacific’s borrowings.

Why else would the military government Attorney-General be making statements on Air Pacific’s behalf?

Notice that no statements are being made by the chairman of the Air Pacific board (Mr Nalin Patel) who is smart enough to stay out of sight while Mr Sayed-Khaiyum prances around in the limelight.

It is not reassuring to FNPF members to hear the voluminous spin that is coming out of the leading players in this deal.

The CEO of Air Pacific declares that this purchase would be a ‘milestone’ for the Fiji public (let us not think about ‘millstone’).

Mr Sayed-Khaiyum proudly declares that FNPF putting a $200million down-payment on a very risky billion-dollar purchase by an airline that has gone into a loss-making situation is just like Singapore’s pension fund which invested in Singapore infrastructure, proving that ‘Fijians can think outside the box’.

Yeah! Just before the Fijians fall into that coffin box!

Aiyaz Sayed-Khaiyum’s astonishing slick vacuous spin goes on day after day, on subject after subject, while he and Bainimarama play Russian Roulette with FNPF and Fiji people’s lives.

FNPF not learning from mistakes

Despite all the spin, FNPF is not thinking about what FNPF can do if the borrowers are not able to repay the loans.

Fiji’s commercial banks will quite sensibly not lend a penny to the loss-making Fiji Sugar Corporation, or to Air Pacific, for a very good reason: should these shaky borrowers fail to repay the loans, the lender would be stuck with collateral which they cannot reconvert back into cash.

Nor would the banks want to take over these enterprises and run them back into profitability, as that is not their business, even if they had the skills.

FNPF has already made huge mistakes with loans to FSC, which it cannot conceivably take over even if the loans are never repaid.

It has also made huge mistakes at the Natadola project which was taken over after the 2006 coup, and large amounts of good money was thrown after bad.

FNPF now plans to repeat these mistakes with a huge loan to Air Pacific.

If Air Pacific fails to become as profitable, as it needs to be to repay its billion-dollar loan, FNPF will be in no position to take over the airline business.

You can also be sure that the European credit companies will ensure first rights over the collateral should Air Pacific go bust.

Nobody will be held accountable.

FNPF paid huge fees to a consultancy firm, Promontory, to advise it on how it should be run. Promontory said what I have been saying for a long time: FNPF investments and loans must be managed solely in the interests of the contributors and pensioners of FNPF.

FNPF is not there to try and solve the development problems of Fiji nor to be a cash cow for the government of the day.

FNPF has no business going into risky investments like loans to financially troubled enterprises like FSC or Air Pacific, especially when the collateral will not cover the loan if there is default.

The fact that the FNPF Board and Management continue to make these risky loans clearly proves that all their rhetoric about FNPF reform etc is just hot air and spin.

No FNPF board member or military government member has taken personal responsibility for the mess at Natadola.

They will also walk away from the current mess. As always, the FNPF contributors and pensioners, and taxpayers, will be left to pick up the pieces. Whatever is left.