Flying high in the world of theatre 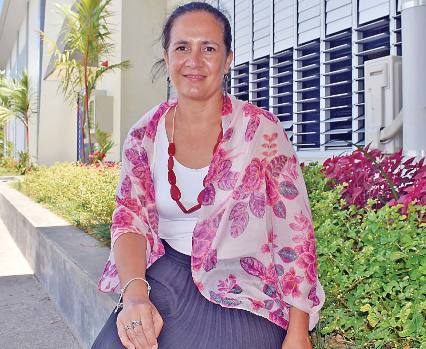 Letila Mitchell is a Rotuman performing artist from Fiji. She is the former director of the Fiji Arts Council and the founder of the Pacific Arts Alliance. She is the first Fijian woman to become a producer for First Nations programming at the Sydney opera House. Picture: JONACANI LALKOBAU.

LETILA Mitchell is the first Fijian to hold the position of producer for First Nations programming at the entertainment mecca of Australia, the Opera House.

The Rotuman woman was part of the programming team that was solely responsible for buying or creating shows at the iconic theatre.

The team’s major work this year was titled “Natives Go Wild” — a show which portrayed how indigenous Pacific people were kidnapped and coerced to join big circuses. Among those taken against their will were five Fijians.

“The work was about all the circus performers in the 1800s right through to the past few decades,” she said.

“The movie The Greatest Showman was one of them — a lot of the freaks in the show were actually kidnapped from the Pacific.

“There were about five Fijians that they noted who were actually kidnapped for this show.” Ms Mitchell said the production team did their best to tell the story in a theatrical setting.

“We did seven shows in the Opera House and they were all sold out.

“I was honoured to work with Rhoda Roberts who is our head of programming and to just work with people at that level was amazing.

“For me, it was a great learning experience on how to create shows at that international level.”

Ms Mitchell said through the experience, she saw where Pacific artists’ positions were in terms of performances on the international stage.

“The important thing to note is that we definitely have all the skills and the talent to be at international level.

“It’s just in terms of the infrastructure around us — you know the marketing, helping our artists to be able to get all of their media kits together that we still need assistance.

“This was a really great learning experience and we did other shows where we had five concerts which was sponsored by Airbnb.” She said the concerts brought new and emerging musicians into the Opera House.

“Just last week we had a big festival called dance rights and this brought in indigenous communities from all over Australia.

“There were over 400 artists who were part of that and it was held on the fore court of the Opera House which is a really massive outdoor venue.

“Over 11,000 people were in the audience and we had performers fly in from native American and Canadian communities as well, so it was really exciting.”

Ms Mitchell said in terms of learning, the Opera House experience has added new dimensions to her palette of entertainment and event management skills.

“I think working in Fiji and the Pacific put me in such a good position because you know we have really grown strong in our culture. I was able to help develop cultural protocols in the shows and help with the process of bringing that work into the Opera House.”