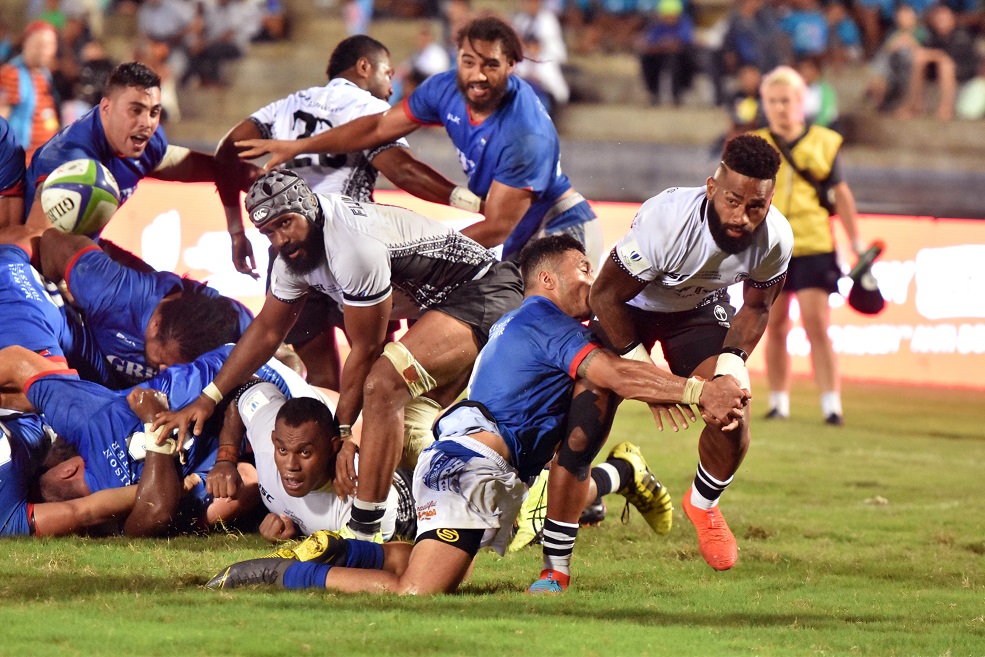 Flying Fijian Nikola Matawalu in action against Manu Samoa at the ANZ Stadium in Suva on Saturday, August 10, 2019. Picture: RAMA

“There are still a lot of ‘work-ons’ and we will look to it before the Rugby World Cup.”

Samoa showed they were here to play by denying Fiji possession for most of the first half.

Samoa had an early opportunity to break the deadlock with two penalty attempts from flyhalf Ulupano Seuteni, 30 metres from in front of the uprights but he failed the conversion.

Fiji slipped past the Samoan defence, but it was the finishing touches and the handling that let them down.

Ben Volavola put Fiji in front with a successful penalty eight minutes from the break after the Samoan forwards were caught offside 35 metres from the left of the uprights on the embankment side of Suva’s ANZ Stadium.

The shoe was on the other foot in the 38th minute of play when this time Fiji was penalised and caught offside in their own 22 metre.

Seuteni made no mistake by nailing the penalty to level scores and sending both teams to halftime tied at three points all.

Samoa looked poised to strike early in the second half, but a turnover inside Fiji’s 22 metre line saw Fiji’s Frank Lomani work the ball wide for Semi Radradra who broke the defence and set up veteran winger Vereniki Goneva six minutes into the second half to crash over for Fiji’s only try of the match.

Goneva, of Nadi, wrote his name in the history books as Fiji’s top try-scorer after former and late rep Senivalati Laulau, also of Nadi. Volavola added the conversion giving Fiji a seven-point cushion.

Fiji’s defence held strong in the second half as Samoa kept all possession but again failing to score points.