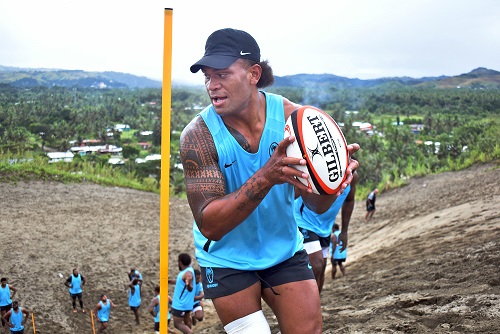 Former All Blacks and Flying Fijians squad member Setareki Tamanivalu is grateful for the opportunity to be part of this year’s Pacific Nations Cup squad under coach Vern Cotter.

Tamanivalu joined the squad for a training session at the Sigatoka Sand Dunes yesterday.

“I am happy and thankful to be given a chance to come and represent my country,” said Tamanivalu.

“I had received a lot of well wishes when I was initially named and I want to thank everyone at the Fiji Rugby Union and the people of Fiji for welcoming me.”

The Toshiba Brave Lupus winger, who previously played for the Chiefs and was a Super Rugby winner with the Crusaders, said it was always a dream for every kid to represent their home country and he speaks on behalf of his former All Blacks team mates Malakai Fekitoa, Charles Piutau and Augustine Pulu who are in the Tongan squad for the PNC.

“I know I speak for me and my former All Black teammates when I say it is always a different feeling when you get to represent your country. Returning to your roots and the place where you started your rugby journey is special.

“On the first day of camp, my family called and asked how my first day went. I played with most of these players in secondary school so the connection is already there.

“This is something that I had been wanting to do for a while and I am really humbled to be a part of this team.”

Tamanivalu said the team knew how tough their opponents would be and they were up for the challenge.

“We had a meeting the other day and we were told not to underestimate any of the teams in the PNC. These teams are certainly no pushover and we will have to fight hard for a win. We are aware of the expectations of the nation and I urge every rugby lover and supporter to back us as we take on these world class teams next month.”

The 2022 edition of the Pacific Nations Cup kicks off on July 2 and features Tonga, Samoa, Fiji, and Australia A.