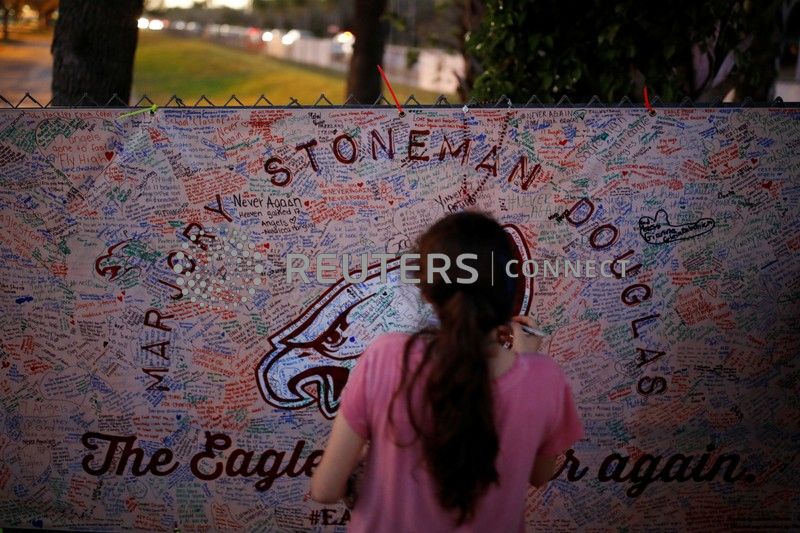 A girl writes a note on a banner placed on the fence of the Marjory Stoneman Douglas High School to commemorate the victims of the mass shooting, in Parkland, Florida, U.S., February 21, 2018. REUTERS/Carlos Garcia Rawlins/File Photo

(Reuters) – A Florida sheriff on Wednesday said he fired two more deputies for their inaction during the 2018 massacre of 17 students and staff at Marjory Stoneman Douglas High school, one of the deadliest school shootings in U.S. history.

Broward County Sheriff Gregory Tony said the deputies, Edward Eason and Josh Stambaugh, were terminated on Tuesday following an investigation into the conduct of seven deputies during the shooting.

Eason and Stambaugh could not be reached for immediate comment.

Four Broward County deputies have now been terminated for neglecting their duties during the shooting. One – Scot Peterson – was charged on June 5 with felony child neglect and negligence after having taken cover outside the school building while a teen gunman went on a rampage inside.

Peterson was briefly jailed but is currently out on bond.

No disciplinary action will be taken against the remaining three deputies, Tony said.

“As we conclude this final chapter for this organization in terms of this internal affairs investigation, we are now going to continue moving forward with fixing the issue that exists here in the agency related to training,” Tony told a news briefing.

Tony fired Peterson and Deputy Brian Miller earlier this month, saying they had neglected their duties during the shooting.