Florida sets one-day record with over 15,000 new COVID cases, more than most countries 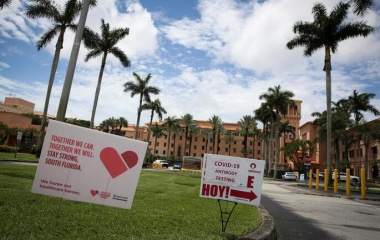 (Reuters) – Florida reported a record increase of more than 15,000 new cases of COVID-19 in 24 hours on Sunday, as the Trump administration renewed its push for schools to reopen and anti-mask protests were planned in Michigan and Missouri.

If Florida were a country, it would rank fourth in the world for the most new cases in a day behind the United States, Brazil and India, according to a Reuters analysis.

Florida’s daily increases in cases have already surpassed the highest daily tally reported by any European country during the height of the pandemic there. It has also broken New York state’s record of 12,847 new cases on April 10 when it was the epicenter of the U.S. outbreak.

The latest rise was reported a day after Walt Disney World in Orlando reopened with a limited number of guests who were welcomed with a host of safety measures, including masks and temperature checks.

Anti-mask activists in several states, including Florida and Michigan, have organized protests against local mandates, arguing that the measures infringe upon individual freedom.

Coronavirus infections are rising in about 40 states, according to a Reuters analysis of cases for the past two weeks compared with the prior two weeks. Nationally, the United States has broken global records by registering about 60,000 new cases a day for the last four days in a row, according to a Reuters tally. Hospitalizations and positive test rates are also rising in Arizona, California, Florida and Texas.

Facing a battered economy as he seeks re-election in November, President Donald Trump has pressured states to reopen shuttered businesses and schools.

Education Secretary Betsy DeVos said on Sunday that her department did not have its own safe reopening plans to promote, and each school district and state must devise their own plans based on their local coronavirus infection rates.