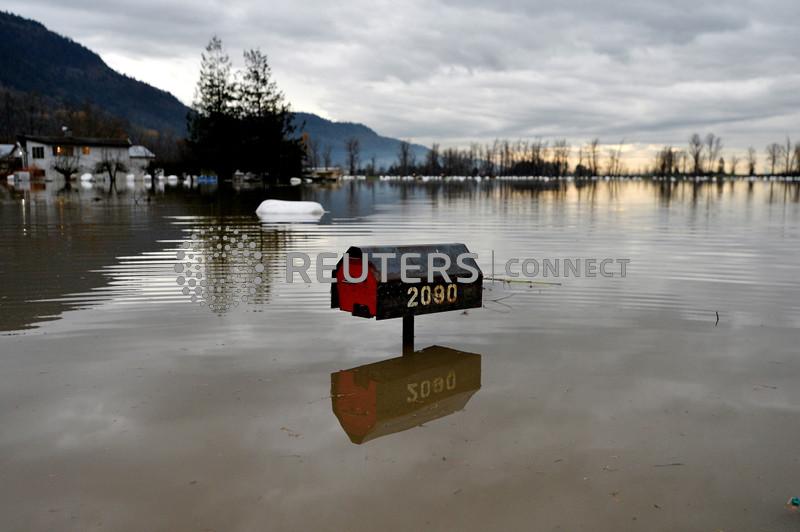 While building new climate-proofed infrastructure is relatively inexpensive, adding between 1% and 5% to total costs, retrofitting existing highways to accommodate climate change or rebuilding roads after they have been destroyed is costly, Pilkington said. He declined to give a dollar estimate for the proposed changes.

Canada’s Pacific province is facing billions of dollars of damages after an atmospheric river dumped a month’s worth of rain in two days on southern B.C, triggering mudslides and washouts that destroyed road and rail routes between the mountainous interior and the coast.

B.C. already requires engineers to take climate change into account when upgrading or building new highway infrastructure. But most of the highways worst-hit in the storm were built in the 1950s and 1960s before global warming was even recognized.

The province is now starting to look at whether it should be retrofitting all its highways to account for climate change, Pilkington said.

“This is something we’ll probably talk about in the weeks and months to come,” Pilkington told Reuters in an interview last week. “To proactively go and replace a lot of these things even while they’re still in good shape is a high cost, and it’s something that we’re trying to figure out.”

Not all its roads are vulnerable to flooding or other climate change risks, but extreme weather this year has highlighted an urgent need to fortify key infrastructure through mountainous regions that links most of export-reliant Canada to its busiest port in Vancouver.

Canada’s federal government launched a C$2 billion ($1.6 billion) Disaster Mitigation and Adaptation Fund (DMAF) in 2018, and added another C$1.35 billion in funding in 2021 to help provinces and municipalities cover the cost of making infrastructure more resilient.

The federal ministry Infrastructure Canada did not offer an immediate comment on whether DMAF can meet all Canada’s adaptation needs, and whether the floods in B.C. will change the government’s climate adaptation strategy going forward.

One major problem is that Canada’s flood plain maps are about 20-25 years out of date, meaning homes are still being built in at-risk areas. Municipalities are responsible for upgrading the maps and work is underway, but experts warn it could take years.

As well as reinforcing highways, B.C. – and the rest of Canada – should be building structures like berms, dykes, and diversion channels within communities to funnel water away from property and key infrastructure, said Blair Feltmate, head of the Intact Centre on Climate Adaptation at the University of Waterloo.

A 2020 report from the Insurance Bureau of Canada estimated it will cost Canadian municipalities C$5.3 billion annually to adapt their infrastructure to avoid the worst impacts of climate change.

Canada already has the ability to identify where water will go when big storms hit, but governments at every level need to be prepared to spend more on climate adaptation, he added.

Feltmate said studies globally have shown that every C$1 spent on climate adaptation avoids between C$3 and C$8 in damages.

“Then sandbags become the point of last resort, not the point of first resort,” Feltmate said. “What we need to do in Canada is stop chasing climate risk. We need to manage the risk and avoid the disaster.”