Fleeing Rohingya on trial in Myanmar for ‘illegal travel’ 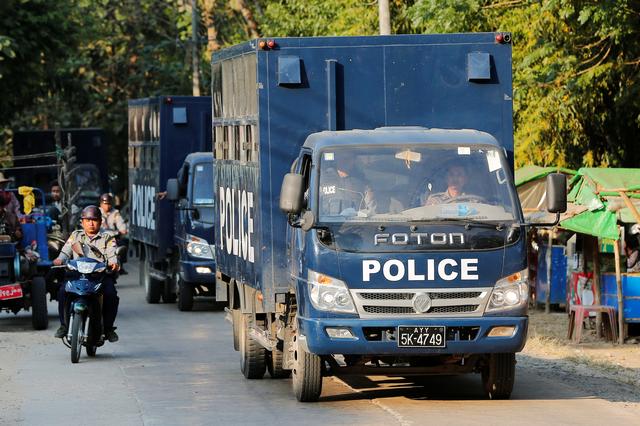 PATHEIN, Myanmar (Reuters) – Dozens of Rohingya Muslims appeared in a Myanmar court on Wednesday to face charges of traveling illegally after they were arrested while fleeing apartheid-like conditions in the country’s Rakhine state.

The group of 93, including 23 children, were brought to court on the same day that Myanmar’s leader, Aung San Suu Kyi, appeared before the top U.N. tribunal in The Hague to defend the country against accusations of genocide in Rakhine.

Armed police barred journalists from entering the court in the town of Pathein, with officials citing “security reasons”. Only their bare feet were visible to a Reuters reporter at the court as police used trucks to block the group from view as they were led into the court. Such hearings in Myanmar are usually open to reporters.

The 93 Rohingya had been arrested on Nov. 28 on a beach in the Irrawaddy delta region of southwestern Myanmar after boarding a boat from Rakhine.

More than 730,000 Rohingya fled Myanmar to Bangladesh in 2017 to escape a military-led crackdown that U.N investigators have said was carried out with “genocidal intent” and included mass killings and rapes.

But some 600,000 remain in the country, confined to camps and villages where they are unable to travel freely or access healthcare and education.

After the hearing, lawyer Thazin Myat Myat Win told reporters a judge adjourned the trial until Dec. 20. If convicted they face up to two years in prison.

“The children fled because they cannot live freely in their area. They tried to find an exit route,” said activist Kyaw Soe Aung, who was observing the case.

The plight of Rohingya still living in Rakhine was in focus at this week’s hearings at the International Court of Justice in The Hague, were Gambia has brought a case accusing Myanmar of violating the 1948 Genocide Convention.

Lawyers for the mostly Muslim west African country on Tuesday referred to conditions inside the camps across Rakhine, where Rohingya are reliant on donations from aid groups, saying the country was “starving” the population.

Opening Myanmar’s defense on Wednesday, Suu Kyi said authorities were taking steps to improve living conditions, including expediting access to education, saying there would be “no tolerance for human rights violations in Rakhine or elsewhere in Myanmar”.

But in recent weeks, several groups of Rohingya have been arrested while attempting to flee by boat.

In November, a Pathein court sentenced 14 people to two years in jail for illegal travel.

“I don’t know what to say,” said 50-year-old Hasin, who said his son was arrested separately while attempting to leave their home in Kyauktaw township. “We have food for lunch and are out of food for dinner,” he told Reuters by phone from Rakhine, breaking into sobs. “We are struggling.”