Fleeing into the fields, a family runs from Idlib attacks 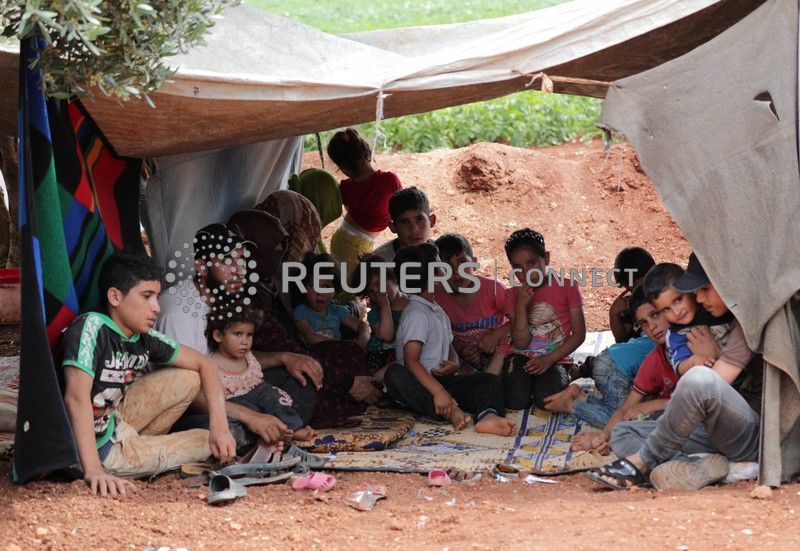 Ali, 25, a displaced Syrian farmer from the al-Ahmed family, holds his daughter as he sits with other family members in an olive grove in the town of Atmeh, Idlib province, Syria May 16, 2019. REUTERS/Khalil Ashawi

ATMEH, Syria (Reuters) – Ali al-Ahmed and his family fled on foot through the fields when the bombs began raining down on their house in northwestern Syria, escaping a major offensive by the Syrian army and its Russian allies.

“In the early hours of the morning, the artillery stopped. Then the warplanes and helicopters came out,” Ahmed, a 25-year-old farmer, said, recalling his last hours in the village of Habeet which he fled with his family of five dozen.

Scattered during their frantic escape from the village, the family are now reunited in a makeshift shelter in an olive grove near the border with Turkey. They are among some of the 180,000 people uprooted by the military escalation.

It marks the biggest upsurge in violence since last summer between President Bashar al-Assad and his insurgent enemies in Idlib province and a belt of territory around it.

At least dozens of people have been killed; the U.N. Office for the Coordination of Humanitarian Affairs says unconfirmed reports indicate more than 170 civilians have lost their lives.

The night before Ali’s family left the village, they hid indoors or in basements. They feared moving around the village even to check whether other inhabitants were still alive.

Shelling hit his small truck, which they had planned to escape in. “The warplane was flying overhead,” he said. “So we stood there watching the truck burn.”

Then they set off through the fields: some of the relatives ran on foot. Others hopped into cars with their neighbours. A few stayed behind.

“For three days, we didn’t know anything about each other,” Ali said.

One of his neighbours managed to run away only to be hit when he reached the main highway, where his wife and children were killed.

The territory is largely controlled by Tahrir al-Sham, a jihadist group representing the latest incarnation of the Nusra Front, formerly al Qaeda’s Syrian wing. The Syrian government says it is responding to attacks by al Qaeda-linked jihadists.

A few days after fleeing, Ali reunited with his four sisters and brothers, as well as some of their children who were lost. With help from neighbours and strangers, they gathered at a friend’s house in north Idlib.

The family ended up in an olive grove in the border town of Atmeh two weeks ago.

“Our entire lives today are under these two trees,” said Ali, who comes from the Hama countryside and had already been uprooted twice before during the eight-year war.

They go out every day in search of farming work to make ends meet. At night, they try sending the children or women to sleep in other people’s tents, said Ali’s sister, Um Mohamad.

The rest sleep out in the open.

Neighbours told them al-Habeet was now almost deserted, houses had collapsed, and rubble had blocked the roads.

“We didn’t expect to come out alive,” she said.