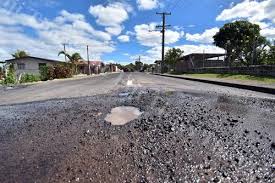 POTHOLES aren’t the only issue commuters and drivers are upset about these days in some of our urban centres.

It’s understandably an issue that keeps popping up when road woes are raised.

To some extent, it’s a bit like playing an old record, or keeping it permanently on replay mode, not that it would matter to lovers of good quality music.

With the windows up, cutting out noise that reverberates from the outside, good music could very well have a positive impact on the mind.

It’s difficult though to cut out the jolts, especially the ones that shake the vehicle, squeezing those shock absorbers and bushings to the max.

These are the jolts that shake the body of the vehicle so much that they leave behind squeaks and other sounds that weren’t there before.

Sometimes they have the power to get the wheel alignment right off.

Well better that than rattling your bones!

Surely the last thing you’ll want is announcing your arrival at your destination via an orchestra of squeaks, rattles and bumps, loose screws and bolts adding a beat to the body work of your vehicle!

For many vehicle owners in the Capital City, there are roads that are like battle grounds.

The potholes have been patched with a ‘bump’!

The only problem being these ‘bumps’, because there were many potholes to begin with!

You only have to drive along Nabua, at the streetlights to understand this, or try Milverton Rd, parts of Rewa St, parts of Queen Elizabeth Drive, the roundabout at Fletcher Rd in Vatuwaqa, Muanikau Rd, Gordon St, Ratu Mara Rd on the way to Samabula, Amy St, and Karsanji Rd to name a few, which is probably quite a lot already!

The bumps will test the most resilient of drivers who treasure their vehicles.

How about driving on the highway to Lami, especially the bit along Suvavou Village! We’ll leave things at that for now.

The impact of some of our roads on vehicles is a major concern. It impacts bodywork, wheel alignment, tyres and the suspension system.

It’s not a new problem as well. The question is how much longer will we continue to live with this?

They leave an indelible impression on the minds of commuters that to a certain extent may not be very good at all for the powers that be.

The key though is finding a way to make our roads better, and pretty fast please.

Make use of the new market, Bainimarama urges