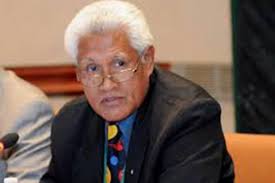 APIA, 15 JANUARY 2019 (SAMOA OBSERVER) – Fiu Mataese Elisara of Sili Savai’i, a critic of the Asian Development Bank’s consultation practices, is disappointed to not have met the President or his delegation in Apia last week.

He said given the volume of correspondence he and his peers have had with the bank since 2014, civil society should have been given the courtesy of meeting a representative.

“I’m very disappointed because there was no attempt by the President to actually meet us,” said Elisara.

“If he is well advised by his own staff – not only of the office of the special project facility but also in terms of the management of the Samoa portfolio, they have a lot of documentation of the grievances for which they are legally responsible and accountable to for that kind of response.”

In particular, Elisara believes the Samoa office of the bank has not been responding adequately to any concerns civil society raise, over not just customary land issues, but also EPC related projects funded by the ADB.

“At that macro level, we are ignored,” he told the Samoa Observer.

“We are not saying we want to meet the President himself but him being here, with his entourage, at least send somebody to meet with us, and he or she will report back as part of this formal visit report so at least that can be catered to that way.”

The ADB has been engaging with civil society organisations (CSOs) for a long time, Elisara believes as far back as 1997. Today, their long term corporate strategy to 2030 states the bank will strengthen cooperation with CSO’s, with a particular focus on groups that target women, youth and vulnerable groups.

“ADB will explore opportunities for increasing their involvement in the design and implementation of projects supported by A.D.B,” the strategy states. To that end, Elisara believes not being met by the visiting delegation amounts to non-compliance of bank policy.

“If we have the leader ignoring that, then it’s also showing non-compliances at the highest level, which does not look good for an institution such as ADB. That’s the frustration I had.”

Elisara said he knows the first priority of ADB is to Government, but finds it annoying and disappointing to not have the relationship with civil society honoured, an equally important stakeholder across ADB projects.

“The president has a number of people in his delegation and therefore I cannot accept that because of the brevity of his visit, the establishment of the ADB office here, the many so called government projects he had to visit, is a valid excuse for not seeing a well-recognised partner like civil society.”

Elisara was particularly frustrated to have not been invited to meet with President Takehiko Nakao or someone from the ADB delegation because of the grievances lodged with the bank, over a variety of projects and issues.