Fit-again Boult back in handy recall for New Zealand 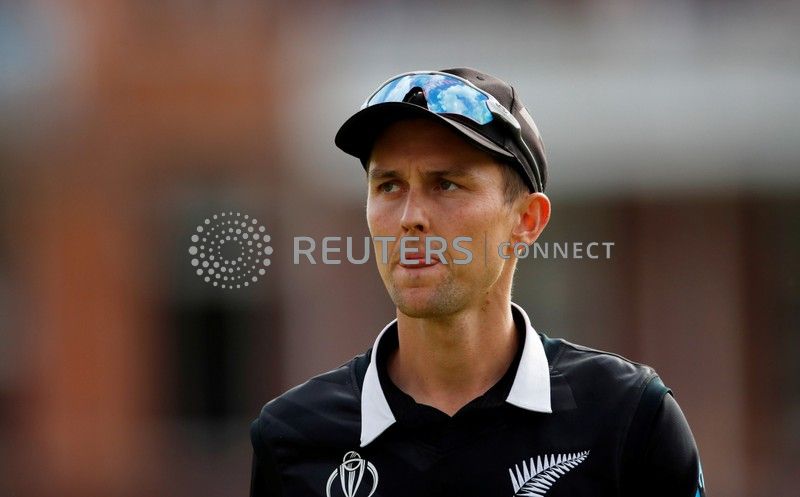 FILE PHOTO: New Zealand's Trent Boult, shown in a file photo, is one of a small number of players to return home after they lost the World Cup final to England. Action Images via Reuters/Andrew Boyers/File Photo

WELLINGTON (Reuters) – New Zealand pace spearhead Trent Boult has recovered from a broken hand to be included in the 13-player squad to face India in the two-test series, as selectors swung the axe following the dismal tour of Australia.

Opener Jeet Raval, spin-bowling all-rounder Mitchell Santer and paceman Matt Henry have all been jettisoned in the wake of the Black Caps’ 3-0 test series whitewash by Australia.

Left-arm spinner Ajaz Patel has been recalled for his first test since the tour of Sri Lanka last August, while Auckland paceman Kyle Jamieson has been included in place of the injured Lockie Ferguson.

Left-armer Boult broke his right hand in the Boxing Day test against Australia in December but is fit for the first test starting at the Basin Reserve in Wellington on Friday.

“It’s terrific to have Trent back with us and we’re looking forward to the energy and experience he adds to the group alongside his obvious class with the ball in hand,” New Zealand coach Gary Stead said in a team release on Monday.

Jamieson earns his place after promising displays in the two one-day internationals against India.

The trusted trio of Boult, Tim Southee and Neil Wagner are likely to form New Zealand’s pace unit but Stead suggested Jamieson was under consideration for the series-opener.

“Kyle will offer us a point of difference with the bounce he could extract on what is traditionally a good surface in Wellington,” he said.

Wicketkeeper-batsman Tom Blundell, who replaced the struggling Raval during the Australia series, will remain at the top of the order after scoring a valiant 121 in the Melbourne test.

One-test all-rounder Daryl Mitchell, the son of former New Zealand rugby union player and coach John Mitchell, has been included as injury cover after making his debut against England in November.

“Daryl showed his batting prowess in his test debut against England in Hamilton and he naturally offers us great versatility with the different roles he can play,” added Stead.

COVID-19: WHO – No new countries report new cases in past 24 hours