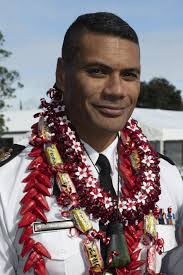 NUKU’ALOFA, 03 JULY 2019 (NZDF) – It will be a very humbling visit to Tonga for Royal New Zealand Navy (RNZN) Warrant Officer Seaman Combat Specialist Mark Latu, as part of the New Zealand contingent to Tonga this week for the King’s Birthday.

He is the first Tongan Warrant Officer in the RNZN, and he wants to demonstrate how leadership is changing in the New Zealand Defence Force, with more Pacific Islanders coming through the ranks.

“I’m going to be where my parents grew up,” he said.

“They were the first generation to come over to New Zealand, not knowing any English, and paving the way for myself and my siblings, so we can go back and help our family that are there.”

Warrant Officer Seaman Combat Specialist Latu, 42, who grew up in South Auckland, tries to get to Tonga as much as he can, and takes his family back at least once a year.

“It’s important for my kids to see where they come from and see how lucky they are,” he said.

Warrant Officer Seaman Combat Specialist Latu was promoted recently to Warrant Officer at Devonport Naval Base, in an impressive celebration of his trade, family and culture, attended by Chief of Navy Rear Admiral David Proctor.

“My brother had joined the New Zealand Army but I opted for the Navy. My family were really supportive,” he said.

“I was 20 when I joined. I was in between jobs, and I wanted to see the world. Basic training was great fun. It was all about routine, and I enjoyed that.”

He got to see the world almost immediately, posting to Leander class frigate HMNZS Wellington for a South East Asia deployment.

In 2013 he had an exciting year as Chief Bosun’s Mate on HMNZS Te Mana, deploying to the Horn of Africa as part of a Combined Task Force to counter piracy in the region.

“That was a highlight,” he said. “Our trade is always going to be hands-on – you are the operator with a strong skill set in weapon systems, boat driving and boarding.”

The RNZN is now a family affair – he persuaded his brother, Sione, to join him in the trade, and he met his wife, Chief Petty Officer Writer Melissa Latu, at Devonport Naval Base.

“I sold the Navy to Sione,” he said. “Service and duty, loyalty, humility, that’s all Pacific Island. It’s what we’re taught when we’re young. And we’re used to hierarchy – it’s built into the family system.”

Sport has been a big part of Warrant Officer Seaman Combat Specialist Latu’s life and he has been provided plenty of opportunities in the RNZN. He has represented New Zealand in rugby league sevens and was player of the tournament in the Commonwealth Cup international navy rugby tournament in 2006.

He is currently studying for a Bachelor of Applied First Line Management with Otago Polytechnic.

It’s too early to know yet if his three boys will follow in his naval footsteps.

“One wants to be a rugby league superstar, one wants to be Shawn Mendes, and the youngest one is in the terrible twos, so it’s all about him,” he said.