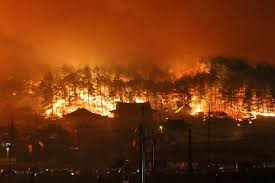 Flames are seen during a wildfire in Donghae, South Korea, April 5, 2019. Yonhap via REUTERS

SEOUL (Reuters) – Thousands of firefighters and soldiers are starting to contain wildfires in South Korea on Friday which have killed one person and forced more than 4,000 people to flee their homes, the South Korean government said.

The fires broke out in eastern Gangwon Province on Thursday evening and spread to the cities of Sokcho and Gangneung, burning about 525 hectares (1,297 acres) and some 198 homes, warehouses and other buildings by early Friday, the government said.

About 2,263 citizens were evacuated to gymnasiums and schools by early Friday, down from about 4,230 citizens earlier. 52 schools were closed.

President Moon Jae-in has ordered the use of all available resources to extinguish the forest fires, the presidential office said.

Some 872 fire trucks and 3,251 firefighters from all over the country are currently working to contain the wildfire, the National Fire Agency said.

The Ministry of Defense said some 16,500 soldiers, 32 military helicopters and 26 military firetrucks have been deployed as well, and plans to provide meals for 6,800 people.

Some 4 billion won ($3.52 million) in special subsidies will be issued for containing the fires and cleaning up debris, along with 250 million won in disaster relief funds for temporary accommodation and daily necessities for evacuees, the Ministry of the Interior and Safety said.