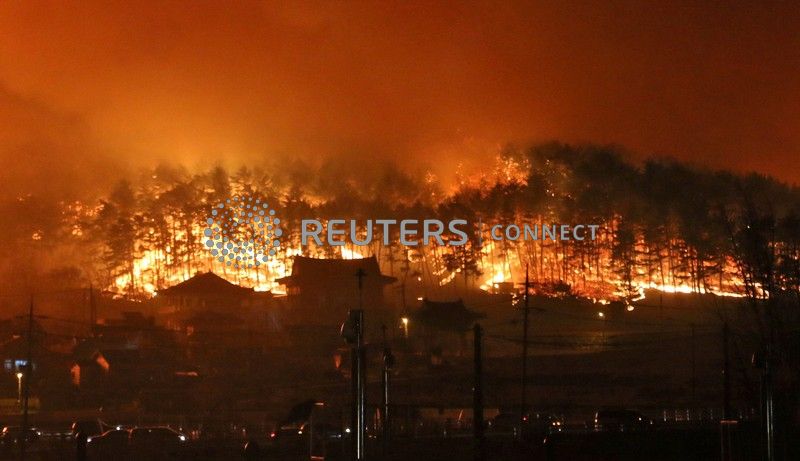 Flames are seen during a wildfire in Donghae, South Korea, April 5, 2019. Yonhap via REUTERS

SEOUL (Reuters) – South Korea mobilised more than 15,000 firefighters and soldiers to help douse most of the wildfires that have killed one person and forced more than 4,000 to flee their homes, authorities said on Friday.

Thursday’s fires broke out in the eastern province of Gangwon, razing about 525 hectares (1,297 acres) and about 134 homes, seven warehouses and other structures, the government said in a statement.

Late on Friday, just 275 people remained in gymnasiums and schools, of more than 4,000 citizens who had been evacuated there. About 52 schools were closed.

The fire in two areas in Gangwon has been contained, the government said, while about 80 percent of the fire in nearby Inje county was contained by Friday evening.

The cause of the fire was suspected to be sparks triggered by power lines, the government said, without elaborating.

President Moon Jae-in, who has ordered the use of all available resources to put out the fires, visited evacuation shelters and talked to victims.

About 872 fire trucks and 3,251 firefighters from all over the country worked to contain the wildfire, the National Fire Agency said.

Subsidies of about 4 billion won ($3.5 million) will fund the effort to rein in the fires and clear debris, while disaster relief funds of 250 million won ($220,000) will help accommodate evacuees and provide necessities, the interior ministry said.