Firearms most lethal suicide method by far in the U.S 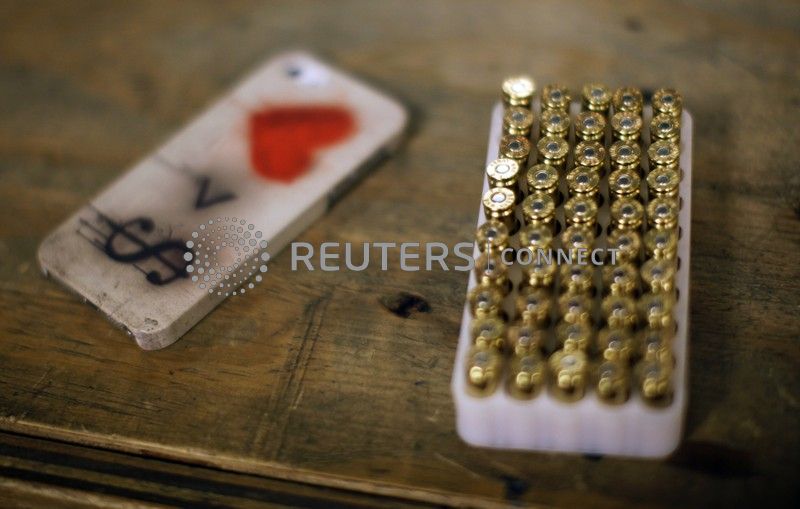 FILE PHOTO: A case of bullets is seen next to an iPhone at the Los Angeles gun club in Los Angeles, January 23, 2013. REUTERS/Lucy Nicholson

(Reuters Health) – Firearms are by far the most lethal suicide method, with nearly nine out of 10 attempts being fatal, a new study finds.

Pinpointing the most lethal method can help experts find ways to cut down on suicides, researchers noted in Annals of Internal Medicine.

“A lot of the disparities we see in suicide rates – higher rates in males, older people and rural areas – can be explained by the type of methods people use,” said lead author Andrew Conner, a medical student at Quinnipiac University in Connecticut. “Certainly, the use of a firearm in a suicide attempt makes the likelihood of death higher than any other method.”

In 2017, suicide was the 10th leading cause of death in the U.S., Conner and his colleagues noted, adding that the overall fatality rate for suicide attempts nationwide is one in 12.

To take a closer look at the epidemiology of suicide in America, Conner’s team turned to three databases: the Nationwide Emergency Department Sample (NEDS), the National Inpatient Sample (NIS) and the National Vital Statistics System (NVSS).

Suicide attempts are often impulsive, said Dr. Paul Nestadt, an assistant professor of psychiatry at the Johns Hopkins School of Medicine and the Johns Hopkins Bloomberg School of Public Health in Baltimore, Maryland. And if you can block that impulse, you may save a life, Nestadt added.

There’s evidence that if you don’t die after attempting suicide, “you’re unlikely to go on and die in another attempt,” Nestadt said.

Studies show that 24% of those who die by suicide made their decision just five minutes before making an attempt and 74% made the decision within an hour, Nestadt said.

So, “if somebody came in to the emergency room and was at high risk of suicide but didn’t require hospitalization, one step you might take is to make sure there are no guns available to that person,” he said. “Maybe family members could hold on to the firearm for a while.”

The new report underscores the importance of focusing on the methods people use in attempts to commit suicide, said Dr. David Brent, the endowed chair in suicide studies in the department of psychiatry at the University of Pittsburgh.

“It’s not specific to guns,” Brent said. “With any method that has a high fatality rate, making access more difficult will prevent some suicides. And any method that can be engaged in an impulsive manner, if you can slow that down you can save lives.”

While firearms are clearly “a huge problem…drug poisoning may be a whole lot more problematic than people think,” said Ian Rockett, a professor emeritus in the department of epidemiology at West Virginia University and an adjunct professor of psychiatry at the University of Rochester Medical Center.

Rockett suspects that many drug-related deaths have been misclassified as accidents. Unless there is a suicide note or a history of psychiatric problems, such as depression, it’s almost impossible for medical examiners and coroners to determine whether an overdose was accidental or was a suicide attempt, Rockett said.

“Most drug deaths are characterized as accidents,” Rockett said. “But, interviews with drug overdose survivors indicate there is much more suicidality among those types of patients than is assumed.”

If you or someone you know is in crisis, you can reach out for help by calling the National Suicide Prevention Lifeline at 800-273-8255.