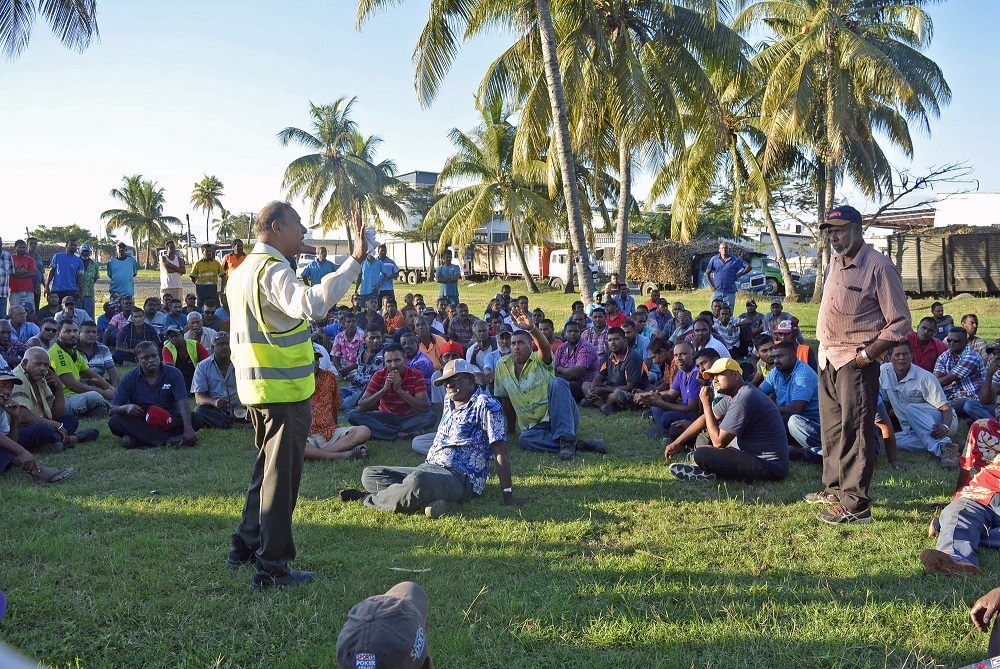 A Fiji Sugar Corporation representative speaks to the truck drivers at the Lautoka Mill on Wednesday, July 10, 2019. Picture: REINAL CHAND

ABOUT 500 cane lorry operators gathered at the Fiji Sugar Corporation mill yard yesterday after five drivers were fined a total of $10,000 by the Land Transport Authority for carting cane in excess of the 16.5 tonne gross weight limit.

“It will be impossible for drivers to pay these kinds of fines.”

Mr Kumar said mechanical issues at the Rarawai mill, Ba, and Lautoka factory had added to the drivers’ frustration.

“Drivers travelled all the way from Ellington II, Rakiraki, to the Ba mill yesterday.

“And because of boiler problems at Rarawai, they were told to come to Lautoka.

“When they got here, the Lautoka mill was not working.

“And to make things worse, some of them got fined.”

Mr Kumar added that drivers had not brought extra food to cater for long layovers because of FSC’s reassurances in the media that the Lautoka and Rarawai mills were both working very well.

“We were only given dinner last night and no breakfast or lunch today (yesterday).”

Sugar Ministry permanent secretary Yogesh Karan said he was aware of the issue.

“The lorry operators contacted me and I have informed them that there is a review meeting between the LTA and industry stakeholders tomorrow (today), so we will await the outcome of that,” Mr Karan said.

“I want to understand how the driver got fined $4000 and see what can be done about this issue.”

Mr Karan said he was also aware that the Rarawai mill was not working, but had not been informed of issues at the Lautoka factory.

FSC chief executive officer Graham Clark said he was aware of the grievances raised by lorry operators and would comment on the issue once the review meeting was completed today.