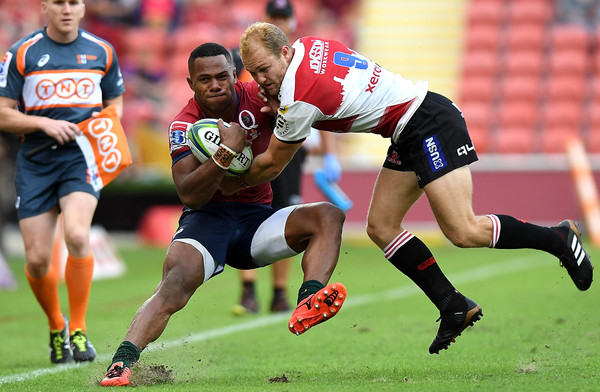 Filipo Daugunu of the Reds takes on the defence of Dillon Smit of the Lions during the round 11 Super Rugby match between the Queensland Reds and the Lions at Suncorp Stadium on April 28, 2018, in Brisbane, Australia. Picture: ZIMBIO/FILE

The Fijian flyer becomes the 14th player to re-commit to Queensland on a long-term deal, that will see him stay at Ballymore through 2023.After bursting onto the Super Rugby scene in 2018, he scored six tries in his debut season and now boasts 21 caps for Queensland.

Daugunu moved to Australia from Fiji ahead of the 2017 Queensland Premier Rugby season to chase his dream of earning a professional Rugby contract.

In his first year at Wests, he scored 11 tries in 13 games, as the Bulldogs secured their first finals appearance in 10 years.

He then capped-off 2017 as the leading try-scorer in the National Rugby Championship (NRC), helping Bond University Queensland Country to their first title with a hat-trick against Canberra in the final.

His irresistible form in the NRC was rewarded with a Reds contract for the 2018 Super Rugby season and it wasn’t long before Daugunu showed Queensland fans his true potential, after debuting for the Reds in Round 1 against the Rebels in Melbourne.

After living in Australia for the past three consecutive years, Daugunu became eligible to be selected for Australian teams last week.