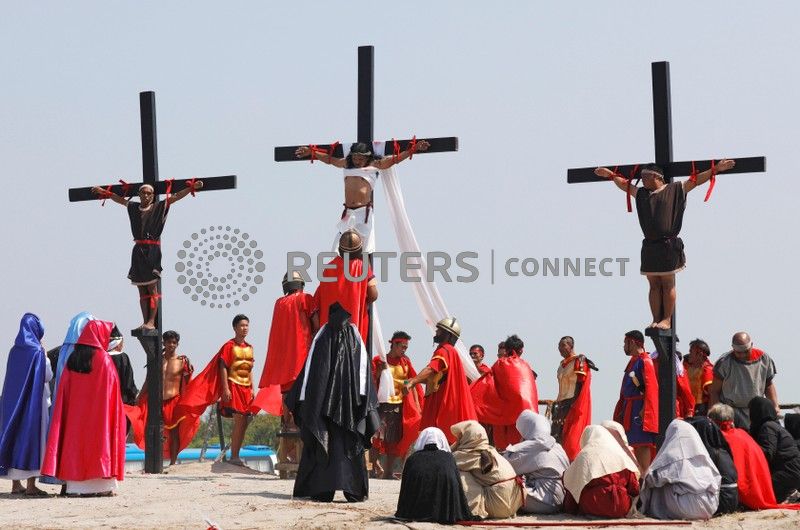 CUTUD, Philippines (Reuters) – Hundreds of tourists watched in shock as actors dressed as Roman soldiers hammered four-inch nails through the hands and feet of a Filipino into a wooden cross for the 33rd time in a Good Friday re-enactment of Jesus Christ’s crucifixion.

The gory display of devotion, which the Roman Catholic Church in the Philippines looks down upon, draws tourists to the province of Pampanga, north of the capital, year after year as barefoot penitents also whip themselves as a form of penance.

“I thought they wouldn’t be nailed but they were really nailed, and it was for me a great event to see it live,” said German tourist Johann Tenken.

Devotees, including 58-year old Ruben Enaje who has performed the act 33 times, believe their penance will wash away their sins, cure illness and lead to blessings.

Enaje was among the four people who were nailed to crosses in the village, including a woman taking part for the 17th time.

The crucifixions were the most extreme display of faith this mainly Catholic country, where millions were praying and fasting ahead of the Easter weekend.

Five other Filipinos were nailed to crosses in two other villages in Pampanga.

“At the end of the day, you have to respect the people doing this because that’s devotion,” said Filipino tourist Bianca Yao.

Christians believe Jesus died on the cross to pay for the sins of humanity and rose from the dead two days later.