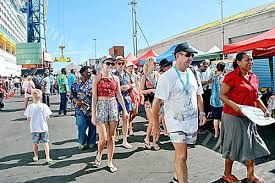 VISITOR arrivals to Fiji increased by 5.1 per cent over the January to March period of this year, up from 163,226 to 171,504 arrivals when compared with the corresponding period in 2017.
The Provisional Visitor Arrivals for March 2018 released by the Fiji Bureau of Statistics (FBOS) noted that the March arrivals also experienced a 10.4 per cent increase in the number of tourists visiting Fiji.
Provisional numbers provided by the bureau this month showed that visitor arrival for March totalled 60,058, which was an increase compared to the same period last year.
According to the data, majority of visitors to Fiji over the January to March period of this year were mainly from Australia and New Zealand, the country’s traditional tourist source markets.
Other visitors were from USA, Canada, United Kingdom, Continental Europe and China.
The data further analysed showed that majority of the visitors were in the age range of 25 to 64 (64.8 per cent), which accounted for the majority working age population.