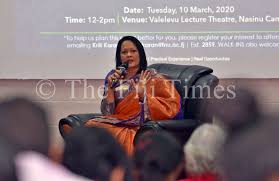 Fiji’s Ministry of Education will be launching its first Free to Air Educational Channel 9 on Walesi TV tomorrow.

Minister for Education Rosy Akbar said 80 lessons had been successfully recorded by the team from the Curriculum Advisory Services, based at the Ministry of Education headquarters.

She said the team had prepared 500 lessons to continue the process.

At present, she said a trial version had been airing from April 27, 2020, for five week.

She said the team had been working tirelessly to prepare the content for the local video production.

As of last Thursday, she said they had aired a total of 66 vernacular Lessons – 33 Hindi and 33 Vosa Vaka-Viti; and 116 literacy and numeracy lessons through the radio broadcasts.