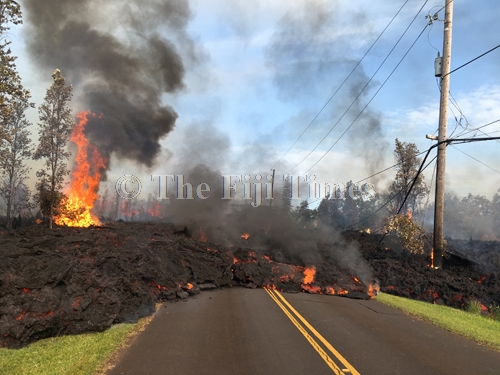 Lava advances along a street near a fissure in Leilani Estates, on Kilauea Volcano's lower East Rift Zone, Hawaii, the U.S., May 5, 2018. U.S. Geological Survey/Handout via REUTERS

FIJIANS living in Hilo, about 15 miles from where the Kilauea volcano erupted on Hawaii’s Big Island are safe.

One former Fiji resident is believed to be among the 1700 people evacuated over the past few days.

Lawrence Fong, a resident in the area, said the Fijian community there kept in regular touch with one another and all seven families were safe and out of the lava flow area.

The Kilauea volcano erupted last Thursday and this was followed by a series of extremely large earthquakes — the biggest was a 6.9 magnitude shake, the largest to hit the region since 1975.

“We are all safe and well here and we are kind of used to going through volcanoes — the last big one was four years ago,” he said, speaking to The Fiji Times from Hilo yesterday.

“The only real concern for us was a Fijian lady of Indian descent who lives in Leilani Estates, this is where there is active lava flow at the moment.

“Last we heard was that she was evacuated and is safe.

The former Nepani resident said despite the frequent volcanic activity and living under the threat of earthquakes and lava flow, there were no plans to return to Fiji.

“My wife is from here and my seven children grew up here so I don’t think I will return any time soon. Maybe when I retire then I might think about it.”