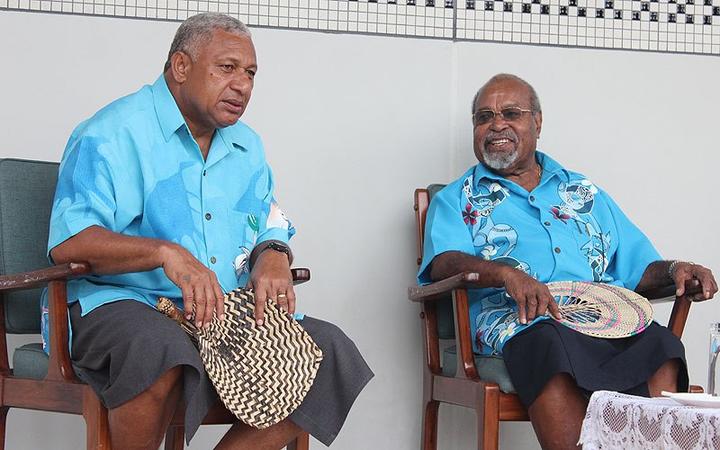 Frank Bainimarama said he was saddened at the loss of his friend and Pacific iconic leader.

Bainimarama said there has been a great mourning across PNG and the Pacific since the passing of the ‘Grand Chief’.

He said Sir Michael was an ‘architect of regional unity’ who would live on in the hearts of the Pacific people.

While he deeply regretted not been able to be in PNG to pay his respects, the Fijian leader said he wanted to honour Sir Michael and reaffirm Fiji’s great friendship with its long-time Melanesian partner.

Meanwhile,Fiji’s main opposition party has expressed sadness over the death of Sir Michael.

SODELPA leader Viliame Gavoka said Sir Michael was an exemplary and a true son of the Pacific who dominated not only PNG politics but the region as well.

Gavoka said under Sir Michael’s ‘extraordinary guidance and leadership, Papua New Guinea achieved independence and an enviable degree of stability in what became the defining hallmarks of his administration’.

Sir Michael was a unifying figure for the Pacific and his death was not only a loss to PNG but to Fiji and the region, Gavoka said.

Earlier, Unity Fiji described Sir Michael as a great national and regional leader who was highly respected by every Pacific islander and beyond.

Unity leader Savenaca Narube said the region had lost a pioneering statesman, who was well known for his ‘art of building consensus and forging unity in very volatile situations’.

“On behalf of Unity Fiji and my own, I offer our deepest condolence and sympathy to the people of Papua New Guinea for the passing away of Sir Michael Somare,” the former Reserve Bank of Fiji governor said in a statement.

“Fiji was blessed with the close friendship between Sir Michael and our late Prime Minister and President, Ratu Sir Kamisese Mara.

“The two statesmen steered the region in uncharted and sometimes turbulent waters as we decoupled our colonial links and imposed our own control of our destiny as a country and as a region,” Narube said.

It was a carving on two poles made by his Murik Lakes people of Mendam, East Sepik, to honour his late friend and mentor Ratu Sir Kamisese Mara.

Ratu Mara was Fiji’s first Prime Minister who took his country to Independence on October 10, 1970.

According to The National newspaper, Sir Michael had planned to take the carving personally to Mara’s village of Tubou in Lakeba, Lau, and have it planted near his grave.

Sir Michael had attended the Fijian paramount chief’s funeral in April 2004 at Tubou. He was one of the few dignitaries allowed onto the chiefly burial ground to witness the final rituals reserved only for high chiefs.

Sir Michael had told The National he wanted to have the special Murik Lakes carving placed next to Mara’s burial site.

But Sir Michael had to postpone the trip because of the Covid-19 travel restrictions, the newspaper said.

The carvings are still at his home in Wewak.

Sir Michael spoke about the special bond he had with Ratu Mara and Fiji.

“As Fiji celebrates 50 years of independence, I wish to congratulate PM Bainimarama, MPs and the people, particularly those who were involved earlier on in the independence of Fiji. I can’t remember the names but I have a good connection.

In 2009, Sir Michael released a book about the life of Ratu Mara titled Tuimacilai: The Life of Ratu Sir Kamisese Mara.

He described Mara as an ‘iconic pillar of hope and strength in the South Pacific’, and a good friend and mentor. 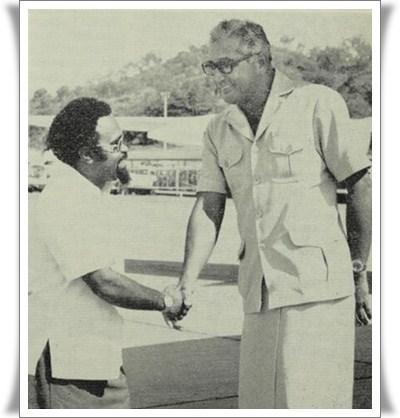 I do so also as a gesture of appreciation for the privilege Ratu Mara had afforded me to be counted among his friends, he said.

“For me personally, the Tui Nayau (Ratu Sir Kamisese’s traditional chiefly title) was my mentor who I have tried to emulate but will never equal, whose counsel I have valued but have since missed and whose friendship I did not deserve but will always treasure.”

Sir Michael said he had deep respect for Sir Kamisese because “the man represented everything that is good, noble and proper in a leader.

“Ratu Mara commanded respect not only in Fiji but abroad as well”.

Meanwhile, all public servants in PNG have been urged to observe the two-week mourning period declared by the National Executive Council (NEC).

The two-week mourning period is effective from February 26.