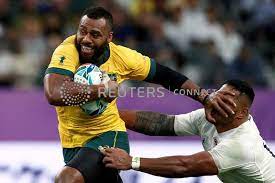 Samu Kerevi in action for the Wallabies. Picture: FT FILE

Fijian duo Samu Kerevi and Mark Nawaqanitawase were named in the Australia 7s team for the Commonwealth Games for Birmingham 2022, rugby.com.au reported.

Nawaqanitawase, who is likely to face the Vodafone Flying Fijians team this weekend, has been playing 15s rugby for the NSW Waratahs in the Super Rugby Pacific competition this season.

Kerevi made his Sevens debut at the Tokyo Olympics.

Last weekend, he produced a man-of-the-match performance in the opening Test win over England.

“It is awesome to be selected for the Australian Team for the Birmingham 2022 Commonwealth Games,” he said.

“It has been a crazy year for many of us, from the Tokyo Olympics, straight into the World Ruby Sevens Series events, and now heading to Birmingham, but it has meant our squad has formed a really solid foundation, and we are playing some great rugby.”