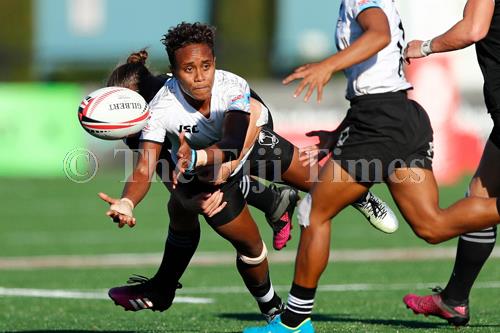 2016 Olympian Tima Ravisa in an earlier game for the Fijiana team in the HSBC World Rugby Women's Sevens Series last year. She has been named in the Fiji Bulikula side to play its first international rugby league test in Australia on June 22. Photo credit: Mike Lee - KLC fotos for World Rugby

FIJI Airways Fijiana 7s team has qualified for the quarter-final of the HSBC Canada Sevens in Langford in Canada. The Iliesa Tanivula-coached side registered two wins and a loss in pool play yesterday, but still managed to book a quarter-final spot against arch rival Australia.

Fijiana defeated England in their first pool 24-14 to set the campaign going in the tournament after the side failed to qualify for the elimination round in the 2018 Commonwealth Games in Gold Coast last month.

Tanivula, helped the team with the talks on the importance of the tournament and the girls came out firing against Brazil winning 47-14 in the second match of Pool A.

Fiji took on New Zealand in the pool decider match which went into New Zealand’s favour after New Zealand managed to escape with a 12-7 win while Fiji finished second with seven points. The side was scheduled to play Australia at 4.42am today.