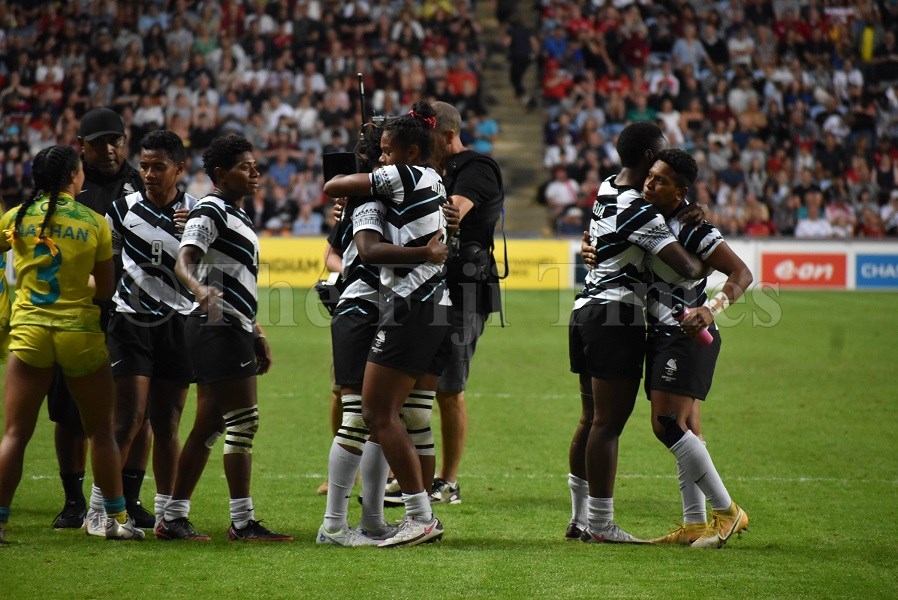 Members of the Fiji women’s team embrace each other after their loss to Australia in the fi nal of the Commonwealth Games 7s competition. Picture: ROHIT DEO

There were smiles all around for the Fijiana 7s members who won silver, their first medal, at the 2022 Commonwealth Games in England.

Going into the tournament, every Fijian fan would have been pleased if the Fijiana had won a bronze, but our women defied all odds to make the final.

We defeated our opponents Australia 19-12 in the pool stages a day earlier, however, the Aussies had been the best women’s rugby 7s team this season and they were expected to come out firing in the final, which is exactly what they did. Australia won the final 22-12, after leading 17-nil at halftime, to win gold, but the Fijiana won the hearts of thousands of fans at the ground and millions who watched them on television.

They were definitely the crowd favourites.

A team which failed to make it out of their pool stages at the last Commonwealth Games in Gold Coast, Australia in 2018, making the final in the next tournament is for sure an incredible journey.

Team captain Rusila Nagasau was over the moon with the win.

“For us it is not about losing today but moving forward. We came into the tournament with the aim to win a medal and we received silver and this is an achievement for us,” Nagasau added.

She added the loss was a learning curve for the players.

“We did expect Australia to come back. Credit to the girls. We fought until the last minute as we came back scoring the two tries. This is something for us to go back and talk about and move on from there,” Nagasau added.

Vice captain Raijieli Daveua added the loss of focus in the first spell cost her side the match. “The first seven minutes we lost focus. We tried to come back but it was too late.

“However, we are happy with a silver medal finish,” Daveua said.

“We won bronze in Tokyo, now silver at the Commonwealth Games and who knows, maybe we will win the World Cup but our game is getting there,” she added.

She said there would be no rest for the girls as the preparation for the Rugby World Cup begins.

The Fiji 7s teams depart for Fiji on Tuesday.