Fijiana and Fijian 7s U18 ready for World School Sevens 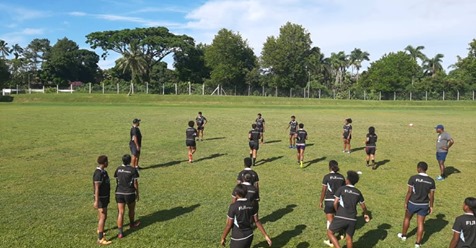 FIJIANA and Fijian Under-18 7s team have departed earlier this morning for New Zealand for the 2019 World School Sevens.

32 international rugby 7s teams will take part in this year’s World School Sevens which will be held in Pakuranga, Auckland, New Zealand from 13-14 December.

Our Fijiana 7s team was selected from the National Provincial Championship which was held in Lautoka last two weeks.

They marched into camp and been training together under the guidance of Coach Koli Sewabu for 1 week.

The 17 member squad consist of players from around different province in Fiji.

The Fijian7s Under 18 side mainly consist of Vodafone Fijian Under-18 team that toured New Zealand.

Head Coach Masi Saqanivere said that the boys have blended in well in terms of fitness and their set pieces.

“Preparations have been going for 3 weeks now and as far as fitness is concern, the boys are in a good shape and are ready, we’ve been playing warm up games week in week out with elite pathway players and non-travelling Fiji 7s team.”

World School Sevens main objective is to provide the highest level of competition to the best young talents in the world as these young players will act as a development tool for the next generation of athletes in rugby sevens.

The competition also aims to give these players a life changing experience in New Zealand involves a week of activities.