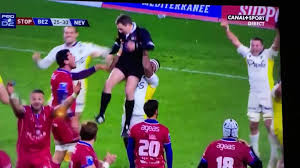 Josaia Raisuqe seen here lifting the referee into the air after Friday's win at Beziers. He was red carded for that. Image: NZ HERALD

Coach of French second division club Nevers Xavier Pemeja has said that Fijian winger Josaia Raisuqe’s lifting of the referee into the air after Friday’s win at Beziers was unacceptable.

France24 reported that Raisuqe grabbed official Laurent Millotte by the waist and took him off his feet as he celebrated the 30-25 Pro D2 victory before being sent off.

“I’ll deal with him. I can’t accept it. What happened at the end there, it’s going to be very bad,” he added.

Raisuqe, 26, who is automatically suspended after the red card, joined the club in 2017 after two seasons with top-flight Stade Francais where he scored three tries in 11 games.

In July 2017 he was sacked by the Parisian outfit after he was accused of sexual assault which he denied.