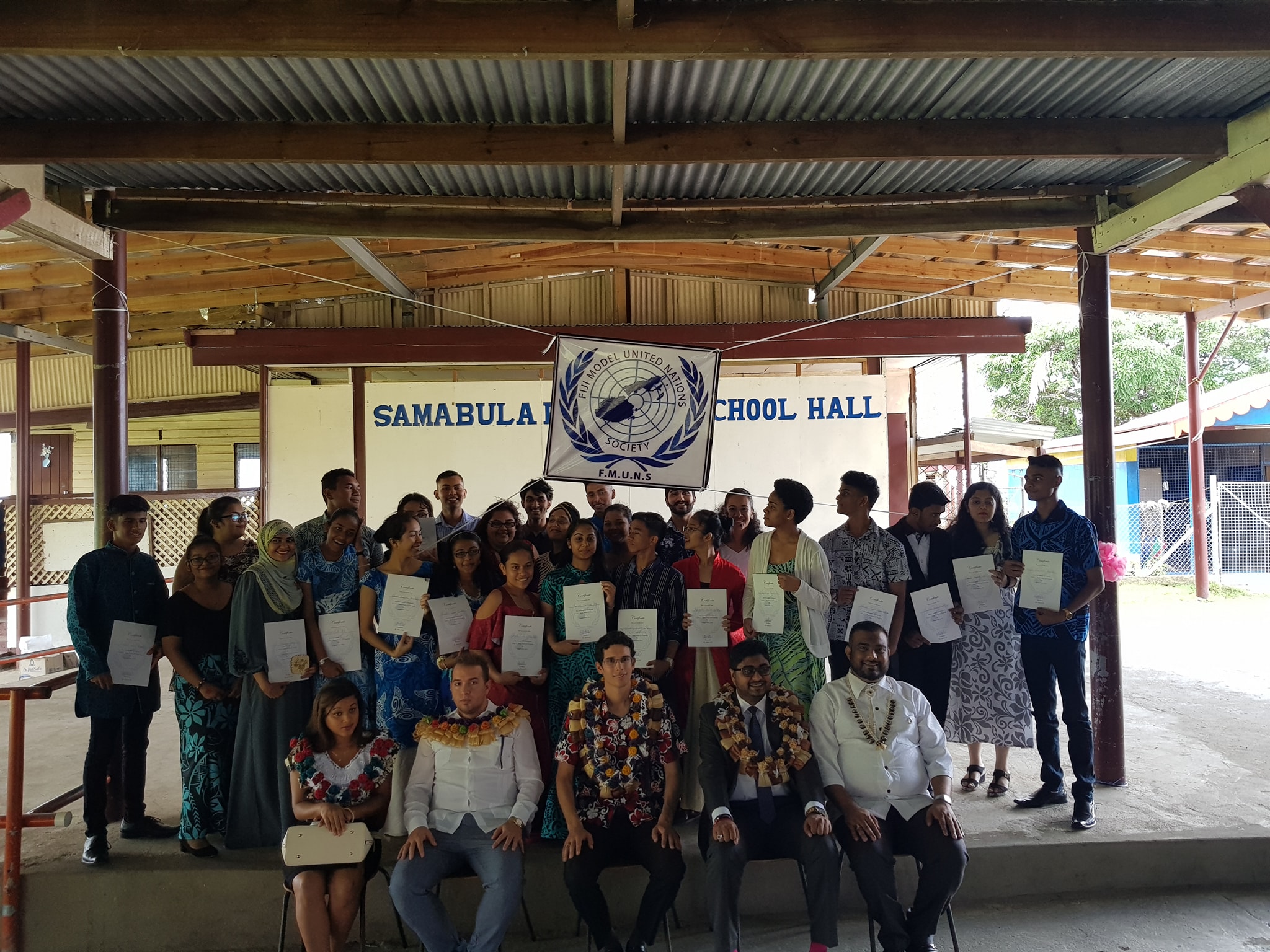 FMUNS participants with ambassadors from Cua and Spain in Suva at the weekend. Picture: SUPPLIED

THE future will be a better place if students follow their dreams with hard work and humility.

Speaking at the graduation ceremony for the Basic Model United Nations (MUN) training in Suva at the weekend, the Chargé D’Affaires at the Embassy of the Kingdom of Spain, Daniel Montilla  Rubiales, who was chief guest, encouraged graduates to build on these core values if they were to impact change on the world.

Twenty-seven students graduated from the training of the Fiji Model United Nations Society, a non-governmental organisation which prepares young people for leadership through educational simulation and academic activities.

Since its establishment in 2015, the FMUNS teaches students about diplomacy, international relations, and the United Nations through research, public speaking, debating, and writing skills.

Mr Rubiales thanked the organisation for the initiative, saying he was impressed by the performance and calibre of participants.

He highlighted the importance of travelling to learn about new cultures, languages and meeting new people to understand new perspectives and ways of understanding life.

During the training, students played took on mock roles as ambassadors, wrote speeches, prepared draft resolutions, learnt to negotiate with allies and adversaries in conflict resolutions and navigated the Model UN conference rules of procedures with the aim of mobilising international cooperation to resolve problems and create active citizens.

The deputy head of mission at the Embassy of Cuba, Osmany Cantillo, who was also present at the graduation, encouraged the students to persevere in their studies and believe in themselves.

Mr Osmany said it was a permanent and valuable teaching for a diplomat.

“In the world that we live today, marked by violence, intolerance, political instability and the threat to the survival of the human species due to the effects of climate change, it is essential that any diplomat, regardless of its political and ideological sign, religion, skin color, nationality or country, endorse the values of multilateralism and the United Nations, specially maintaining international peace and security, developing friendly relations among nations based on respect for the principle of equal rights and self-determination of peoples, achieving international co-operation in solving international problems of an economic, social, cultural, or humanitarian character, and promoting and encouraging respect for human rights and for fundamental freedoms for all without distinction as to race, sex, language, or religion.

“I wish you the best and i hope to see some of you as a diplomat in Cuba or in any other country or international organisation promoting the best values of humanity, making a better world that is possible,” he said.

Mohammed Al-Dousary, who graduated as the best overall delegate, said FMUNS had been able to instilll in them three major principles which people tend to forget in life – Class, dignity and elegance.

“I believe that we graduates have learnt a great deal in the past few weeks under the guidance of the right people. Being a party of this organization has helped evolve our behavioural approach in terms of being more pride inherent models for the UN. MUN allows us to deliver the best qualities we possess in such a manner that is sure to spark change in the hearts of millions who have no beacon of hope to guide them towards a future worth existing in,” he said.

“Becoming a part of something of cosmic proportion like the MUN has truly been a dream come true and graduating in the basic level training will serve as a stepping stone towards a marvelous future that we all can be proud of. A future to whose peace we can contribute to. A future that knows no poverty, no hunger, no discrimination, no injustice.

“We have passed the first obstacle. Now, we must tie along peace wherever we go. No matter how desolate or dreadful the situation.”

FMUNS president Akmal Ali said they had set up a branch in the Western Division and looked forward to increasing membership in the new year.

He said the FMUNS had been invited to New York for the National High School Model United Nations, which will host 5000 participants from more than 75 countries in March,next year, and they were also hoping to secure funding for their activities.