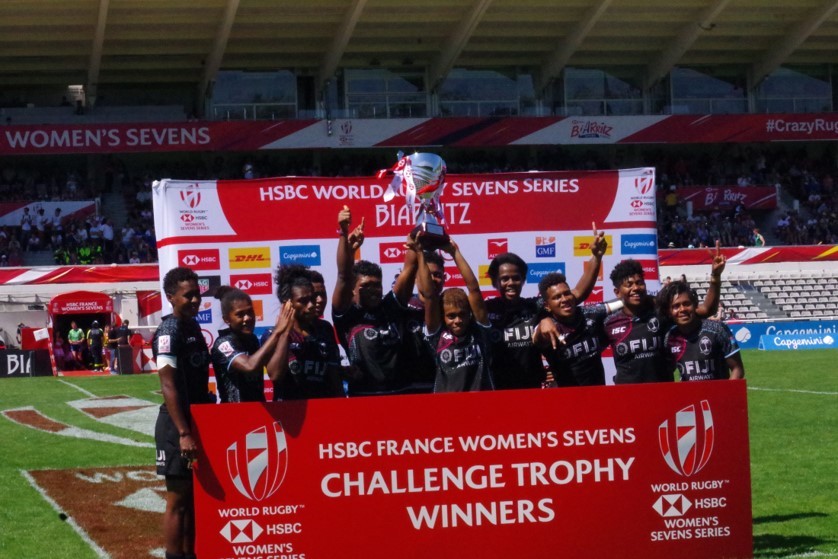 The Fijiana side after winning their fourth Challenge Trophy in France. Picture: SUPPLIED.

THE Fijiana 7s side has secured a place in the 2020 HSBC World Rugby Women’s Sevens Series for next season.

They won the fourth Challenge Trophy in a row with their 27-10 win over England in the Biarritz 7s final but also secured their place as a core team.

Fiji finished 10th on the table, locked 21 points with China but the Fijians had a better points difference.

England’s Celia Quansah scored the first of her two tries to open the scoring, but Fiji didn’t look back after tries from Akanisi Sokoiwasa, Ana Maria Roqica and Viniana Riwai put them 17-7 ahead at half-time.

Raijieli Daveua and Ana Maria Naimasi added tries to allow Fiji to finish the season on a positive note.

Captain Rusila Nagasau said they were happy because they had achieved their goal this season.

“We are proud of ourselves as our aim when we left Fiji was to secure a place in the series for next season. It is very important for us to stay in the top tier as we are also creating pathway for our young and upcoming players.”

Nagasau said it had been a tough journey for the players from the starting of the season in USA.

“Most of us came in the middle of the season. It was a big task for us as we only started playing from Sydney 7s. Coming from eleventh position it was really hard for us to win every game.”

The Saiasi Fuli-coached side will now prepare for the 2020 Olympic qualifiers which will be held in Fiji in November.

The final opportunity for Olympics qualification at the World Rugby Olympic Repechage tournament in the first half of 2020 will feature 12 women’s and men’s teams, with the second and third team in each regional competition invited to participate.