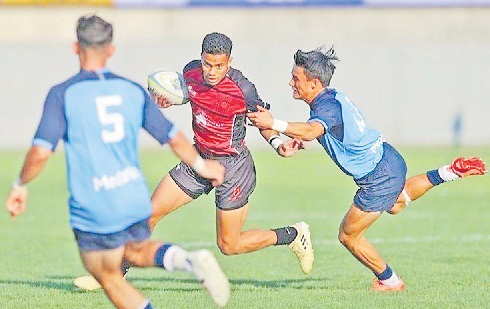 Jerome Nale in action for the Santa Rosa Rugby Club during the Rugbytown 7s tournament in Glendale, Denver, US in August. Picture: SUPPLIED

Another Fijian has been selected to represent the United Sates in rugby 7s.

He was the surprise inclusion in the USA Eagles 7s team for this weekend’s Vancouver Sevens and next week’s Edmonton Sevens in Canada.

The events kick-start the World Rugby Sevens Series after the COVID- 19 pandemic halted the annual series in 2019.

The newcomers include Nale, a halfback and member of the Santa Rosa Rugby Club which was formerly the Lomaiviti USA Club.

Nale’s father Jeke, while speaking from the US yesterday, said his son had reaped the reward of years of hard work.

“It was the years of sacrifi ce that he had been doing that made us all happy today,” Jeke said.

“He is passionate about his rugby. For me as a father and my wife, we are happy that he has reached his goal. He has put in the hard yards and even though we have just been here for more than three years, this is an achievement.

He has been working on his dreams starting from the Kaji rugby days in Suva through to high school. In the US, he continues to train even after returning from night shifts in order to continue chasing his dream.”

Jerome comes from a sporting family with one of his grandfathers, the late Fiji 7s skipper and coach and 15s rep, Aliposo Waqailiti.

Unlike players in the US who go through rugby pathway programs, Fijian Jerome was plucked out of the Rugbytown 7s tourney into the USA Eagles team.

“It is just raw talent, home bred Fijian fl air with rugby passion and dedication that saw him with the good news today. We always tell our children ‘Work hard, tick the boxes and do your uttermost best to reach the pinnacle of your goal.”

The proud father from Vadradra in Ba and his family would be glued to the television to watch the Vancouver Sevens in Canada this weekend.